Well, my first DiD build. I built this guy as a defensible tank, in order to survive DiD for as long as possible, but still kept him able to be taken down if you aren’t careful. Welcome to.... 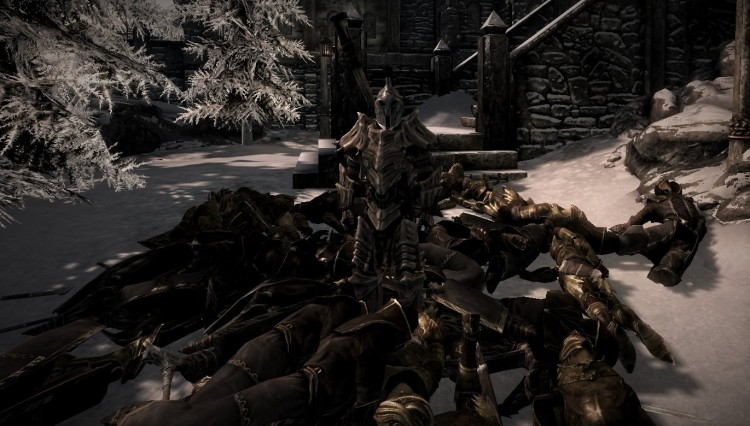 Once, it is said, there existed a great Knight-Cleric of Stendarr, known as The Rock of Stendarr. He would travel the land, in bulky armor, wielding a warhammer said to be made from the tooth or a claw of Nafallilargus, dragon of Tiber Septim, as a gift for saving the life of Zurin Arctus, Imperial Battlemage of Septim. He was surprisingly nimble, yet it could not save him from his fate. One evening, he found an outpost of the Crusaders of Stendarr had been assaulted by Daedra. Crushing many, he fought to avenge his comrades. Yet it was not enough, for a Daedra had forced some of its blood down the throat of the Cleric, tainting his blood. In sorrow, he locked himself away, immortal. Half-mad, he now is said to wander. Hearing of reports of dragons, and wild magics, of which he despised, in Skyrim, he heads forth to the land of the first human empire, warhammer thirsting for blood.....

Race: Preferably Nord Vampire (Lord). They are the second tallest race, the first being Altmer, Battle Cry helps for Crowd Control, and bonuses to Smithing, Two-Handed (Though you could swap it out for One-Handed), and Block. Though, an Orc works too, as they gain bonuses to Smithing, Heavy Armor, Block, Two-Handed, and Enchanting, as well as the awesome Berserker Rage.

Standing Stone: The Warrior to start with, then later, pick up the Lord, for 25% greater Magicka Resistance, or the Atronach, for a 50% spell absorbtion. This allowed him to survive against high level mages and dragons often. If you don’t feel like getting Conditioning, grab the Steed.

Stat Spread: 1/3/2 in Magicka, Health, and Stamina. Magicka will mainly be used for basic healing spells, and wards. Health can stop around 300 or 320, and then put the rest into Stamina, for power attacks, bashes, and rolls.

Now, this character is quite survivable, if you are careful. The Rock will rarely dodge, but when need be, it is quite simple. Either by downing a found or bought potion of Fortify Alteration then utilizing Slow Time, or, if an enemy is power attacking, Quick Reflexes, enter Stealth Mode, and Sneak Roll to either side of the attack.

When approaching enemies, I tried my best to walk towards them, before dropping into a roll and slamming my warhammer or mace to start off combat.

With DiD, you get two mulligan saves, before it takes effect. After that, you can only load a save if you die from a trap, or if you’re wearing an Amulet of a Divine. Once you reload, you cannot use that Amulet for one real time hour.

Now, dragons and mages. Using either the Lord or the Atronach, and Spellbreaker, you should be able to either A. Drain mages and dragons of their Magicka (Which fuels the Shouts of Dragons), forcing them to land/use their weak daggers, or B, in the case of mages, allow you to close the gap. Archers and Warriors you can generally tank their attacks.

You have two combat stances for the Rock:

The Warden-Hefting a large shield, the Rock of Stendarr becomes a near unstoppable walking fortress. With either a ward in the other hand for increased AR and blockage of spells, or a mace, the Rock can hold the line against groups of foes.

The Dragoncrusher-This form believes that the best defense, is a great offense. Switching out the shield-and-ward or shield-and-bludgeon for wielding a warhammer, we get pure offense on this brute.

One-Handed-Using the Dragon Tooth in one hand, you should be able to turtle behind your shield, allowing you to attack fairly quickly, and absorb health.

Two-Handed-Two-Handed allows you to be fully offensive. Two-Handers give you longer reach than a one-handed, and warhammers go through armor with the correct perks.

Heavy Armor-With around 300 or so health, weĺl need the defense of heavy armor to keep up alive. Dragonbone Armor gives us a great armor rating, and seriously, who doesn’t want to go dragon hunting wearing the bones of their fallen brethren?

Block-Utilizing either Spellbreaker, or our Dragonbone Shield with Resist Magic, we should be able to close the gap with mages and dragons quite easily, and use our shield as a weapon with bashes. Also perfect if you need to heal.

Restoration-Using only the basic Healing spell, Restoration was primarily used for Wards, which increase your armor rating, as well as mitigating, and absorbing with the right perk, damage from spells, and raise your skill level. You may also train with Coilette in the College.

Smithing-Allowing us to create our endgame armor, smithing is easily leveled via training with Eorlund, smithing Dwarven Bows, and smithing jewelry

Sneak-Easily trained by sneak attacking Ralof, getting to 50 is an easy goal. Allowing us to simulate a dodge roll, as a number of games have, it never felt so fun to roll around in heavy armor.. 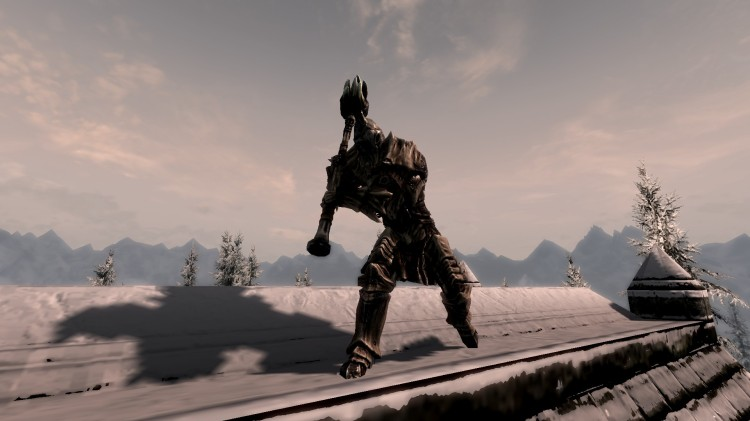 Utilizing the Vampire Lord/Werewolf Chat Glitch, you can equip both an Amulet of Stendarr, and the Mountain Smasher’s Amulet

Tactics of the Rock of Stendarr

Combat Dodge-With quick timing, the Rock effortlessly dodges a blow from a foe.

Bastion of Stendarr-Raising a Dwemer shield he stole from Peryite, the Rock offers a prayer to Stendarr, as he becomes neigh impervious to harmful magics.

Thank you to Golden Fool for Perk Spread 2, and the Equipment Spread, FishDonut for Perk Spread 1, Mason for advice on the Help Desk, and Mannimarco for the awesome screenshots