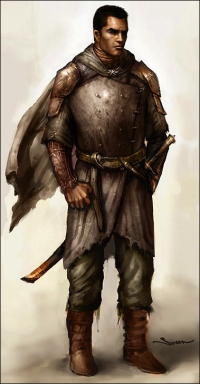 The Sword-singers were a prominent faction of swordsmen who hailed from the ancient island nation of Yokuda. The most powerful of the Sword-singers were capable of summoning powerful “spirit blades” called Shehai to aid them in battle. These men and women were granted the title of Ansei. So great was their power, that even during the events of Skyrim, literally eras later, the Ansei are often considered the greatest swordsmen — or even the greatest warriors — to have graced Tamriel.

Unfortunately, the Sword-singers were purged from Yokuda by Emperor Hiro in the First Era, and while some 20,000 survivors did manage to take refuge in Hammerfell by way of the island Herne, the faction seemingly died out centuries before the events of Skyrim.

“Oh but the gods did give me other gifts, the gift of sword singing, the thrill of battle, Frandar Hunding's Book of Circles, THE WAY OF THE SWORD.”

This build was originally going to be an Ansei outright, but I ran into several problems during development that made that idea somewhat less appealing than I had originally hoped. My solution was to follow an Ansei from his early stages as a Sword-singer: still a talented warrior, but unable to form a Shehai and therefore unworthy to be called an Ansei.

Let us us assume that when the Ra’Gada immigrated to Tamriel, a small group remained on Herne rather than continue to Tamriel proper. Let us also assume that this community has continued to survive in isolation, developing its own tiny subculture more closely related to the old Yokudan ways than any surviving Redguard communities in Hamerfell.

If you are comfortable making these assumptions, then accompany me as we follow the path of one particular young warrior who leaves this community in the pursuit of knowledge — and ultimately, his destiny as Dragonborn.

Part I: The Brother of the Blade

Weapon » A tempered Blades sword. It’s light, durable, fast, and easily improved with a single perk from the Smithing tree (such a trivial investment that I opted not to list it as even a minor skill). Keep it unenchanted for use with Elemental Fury.

“To you who are not Singers, this is a wilderness trek emulating the time of Frandar Hunding - where we each wander the country side righting wrongs, defeating monsters, performing quests in the name of virtue.” 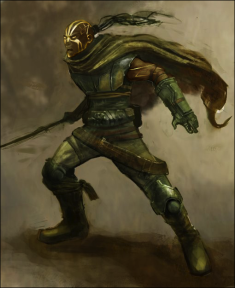 The first thing to do is to assemble your gear. Completing the requisite tasks will also get you started on your walkabout in Skyrim.

The walkabout has been a Sword-singer tradition since their early days on Yokuda. The walkabout essentially consists of traversing the land seeking out honorable deeds to help you develop as both a warrior and a student of the Book of Circles (see Roleplaying Notes).

Once you have acquired your gear, you are ready to begin your walkabout in earnest. I suggest joining the Companions so that you have a group of honorable warriors to associate with, but try to avoid climbing too high in their ranks. You are a Sword-singer first and foremost, not a Companion.

"Quickly we used up a crystal of healing in restoring him to vitality."

To simulate the healing crystals described above, pick up an ancient crystalline artifact of your own: the White Phial. The Yokudan knowledge of science and magic that was required to make these crystals has been forgotten with the majority of their ways, and part of the Sword-singer’s walkabout entails the quest to regain that knowledge. The White Phial is quite possibly the missing link to regain the Yokudan crystal-making techniques, so study it and model your own alchemical experiments after your findings.

I recommend training Block with Njada Stonearm from the Companions early on. The Quick Reflexes perk is vital in simulating the Sword-singers speed and dodging ability. Likewise, Power Bash is a perfect representation of the Sword-singer’s skill in parrying. The Sword-singer as I envision him generally prefers to block with his blade rather than a shield, but having a shield on hand would not be a bad idea.

The combat for this build is meant to be almost an art form, like fencing. It is important to keep this in mind during gameplay. Brutish hacking and slashing is beneath a Sword-singer. I made a conscious decision to forego any special moves with this build, relying instead on tactical discipline, physical skill, and timing (i.e., dodging, blocking, angles, vision, etc.). Special moves would only cheapen the importance on the requisite swordsmanship.

Be sure to hold on to every sample of Hanging Moss you find (Solitude Catacombs are teeming with this plant), as well as every soul gem. You will need these later on, and having a stockpile assembled over the course of 30 levels of gameplay will make things much easier down the road. New Weapon » The fundamental difference between the Ansei and Sword-singers is that Ansei are capable of summoning a fully formed Shehai, or Spirit Blade. These legendary ethereal swords are more powerful than any physical blades. To counteract the Bound Sword’s inherent weaknesses, the Ansei draws from a specialized fountain of power: the Yokudan Crystal of Focusing (see Key Potions for details).

“Oh I slew mightily, right and left, like a scythe through wheat. All the way to the Lord of the Tower I fought. With one blow I cut his magical armor asunder, one more took his head.”

The combat for this portion of the build is largely similar to the previous portion. The key differences are preparation-based, stemming from the nature of the Shehai. Due to the nature of the Bound Sword, Elemental Fury is no longer effective in combat. The Ansei substitutes that with Slow Time to maintain a similar net effect, becoming a furious blur of poetry in motion. You can also use Slow Time as a sort of “extended Quick Reflexes” to simulate development with that ability.

In addition to stunning enemies with the bashing perks from Block, the Ansei is capable of staggering enemies with his very voice, via the Clear Skies shout (simply aim the shout at a nearby enemy, all it takes is one word). And when he does bash, he is capable of rending weapons from enemy clutches.

“We sent him on to the king, while we six grabbed our weapons and armor of power, and as many potions, marks, and crystals and rings as we could carry.”

The core difference outside of combat is the addition of Enchanting. I know many people find the game to be too easy when you specialize in two crafting skills, so I did try to limit the investment as far as perks go. However, with this build, Enchanting is appropriate both from a lore perspective and a practical one. Specifically, use enchantments to augment the power of your Shehai (Fortify One-handed). To further keep the Shehai on a pedestal, it is important that you only use the Crystal of Focusing (see “Key Potions” below) while wielding your Shehai.

As I mentioned previously, this build intentionally avoids special moves. However, consider that the Shehai is basically a constant special move in the best possible way.

Yokudan Crystal of Focusing (The Hammer)

Yokudan Crystal of Vitality (The Anvil)

The path of an Ansei is a path of honor and righteousness, guided by legendary Ansei Frandar Hunding’s Book of Circles.

I’d like to thank Matt Feeney and Vazgen for all their help. Matt offered tons of wonderful insight and advice that helped shape the character, and Vazgen provided the fantastic screenshots for the write-up. Full album can be found here! And thanks again to HeroicXCV for his fantastic featurette video.

I also want to mention that there is some truly great lore on these guys, and I highly encourage everyone to check it out via the following links: [1] [2] [3] [4] [5]