Welcome everypony, to my latest build, and one of my first on the site. While trying to drum up ideas for builds, I realized I had rarely played as a member of the Orsimer, and that the Rueful Axe is an underused weapon. With that in mind, I created.... 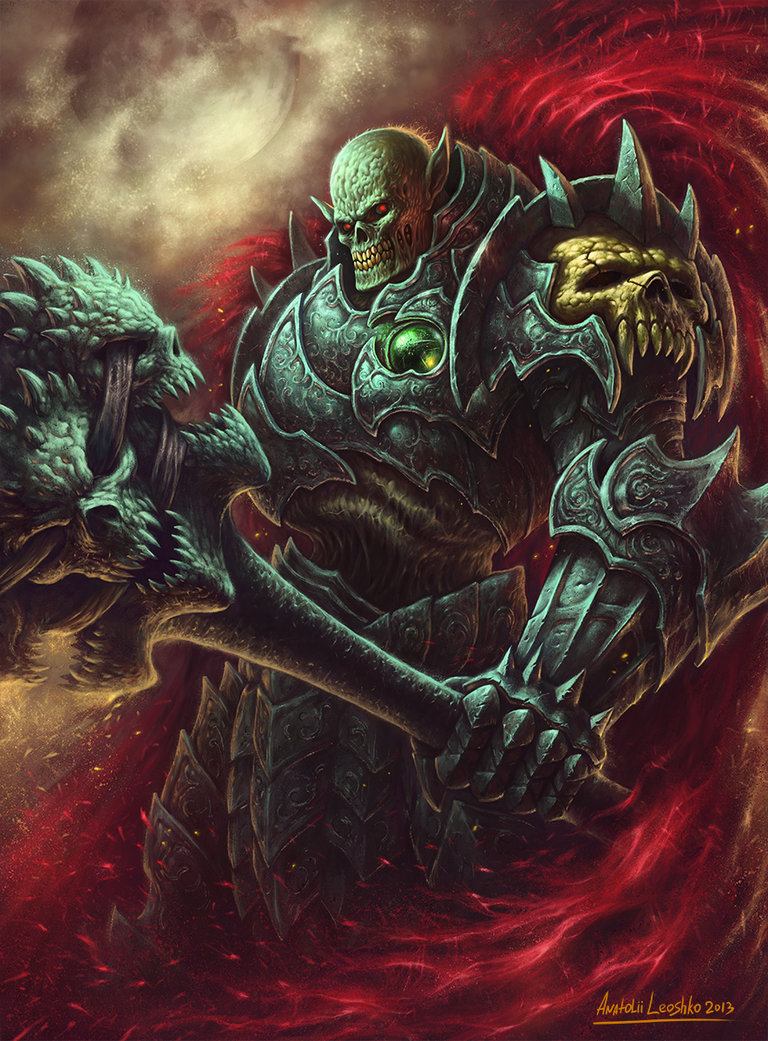 During the first fall of Orsinium, a group of 200 Orcs fled into caves filled with glowing mushrooms. Over time, these strange fungi seemed to have an effect on them, draining their intelligence, but also boosting their physical attributes. They rebranded themselves the Uruks, an old Orcish term meaning ¨Iron Blood¨. Their religion branched off, as did they, into multiple clans. Instead of worshipping only Malacath, they worship either the glowing mushrooms, or a strange pantheon, filled with hybrids of various gods, a hybrid of the Lilac Bay´s Ebonarm and Boethiah, Namira, a hybrid of Clavicus Vile, and an amalgamation of Sanguine and Mephala, referred to The Undivided. This manuscript shall follow the tale of one Uruk I met a little over half a century go, who wished to become an Uruk Magnar, or, in Cyrodillic, an ¨Iron Blood Warchief.¨.......

-Saga of the Warchief, Urag gro-Shrub

Race: Orc. Make ´em as green as possible, with the horn like eyebrows, and your mouth should have at least one chipped tusk. The Berserker Rage works wonders, whether you´re in a bind and need a little power boost, or just wanna go on a slaughter spree. They also gain bonuses to Enchanting, Smithing, Heavy Armor, One-Handed, and Two-Handed. Perfect for an all around warrior.

Standing Stone: Pick up the Warrior Stone once you leave Helgen. Once that´s done, and your skills have been trained up enough, pick up the Lord Stone. Not only does the sweet 25% Magicka Resistance reflect the inborn bonus Orcs back in Oblivion and I believe Morrowind, but the AR bonus also helps this character stay alive from both physical, and magical (Especially fire), attacks. In the Aetherial Crown, we´ll want to slot in the Ritual Stone, for the occasional army if ours falls in battle.

All-Maker Stone: I personally went with the Beast Stone. A little extra Werebear ally will boost your all ready mighty army up.

Stat Spread: 1/3/2 in Magicka, Health, and Stamina. Magicka will be used for the occasional Frenzy/Fear spell, as well as Courage. Health can cap out at 270.

We´ll want to follow Ralof into Helgen, for an early access to an axe, as well as some decent, early level heavy Imperial Armor. Once you reach the bear section, swap out the Imperial Captain´s Helmet for that iconic Iron Helmet. You´ll then want to pick up Faendel, as I personally find that Sven sucks Sload testicles. Plus, free archery training. Speaking off, you´ll want craft as many arrows as possible. While archery is unperked, it is good for whittling the health of foes down during the early levels, as well as taking down enemies like dragons.

Prior to grabbing the Rueful Axe and the Longhammer/Volendrung, I mostly stuck with a simple Steel Battleaxe, and a matching Steel Warhammer,  both of which can be looted on lower level Bandits, or bought at the local blacksmith´s. The Rueful Axe, with its brutal, yet intricate, look, despite its lackluster enchantment, does some pretty decent damage with the right perks, equipment enchantments, and smithing, around 63 base damage by the time I hit level 50. With Sweep, these two will be mainly used against groups of enemies, though the Longhammer, with its speed, which can be expanded on with Elemental Fury, and the Bonebreaker perks can deal quite well with heavily armored, high tier enemies, such as Bandit Chiefs or Reaver Lords.

Axes, preferably Orcish, will be duel wielded, generally. Orcish, as I learned from Curse and Raid´s Riften´s Most Wanted, deal the most Bleed damage, coupled with the Hack and Slash perks. Boosting this will be the occasional Damage Health poison, or the Lingering variant, to boost the damage, coupled with smithing. If you are so lucky, then swapping them out for the even more brutal looking Daedric Waraxes will be even better. These are used for either single fights with tough opponents, swapping out an axe for a Soul Trap enchanted Orcish dagger if you need to recharge one of your weapons, as backup weapons if you are disarmed of your Rueful Axe or Longhammer via a Dragur using the Disarm Shout

You´ll also want to knab a decent horse. Sneaking up behind, and mounting a stallion or mare (That sounded less sexual in my head), will allow you to grab one from the stables. From here, I went about slaying giants, clearing out dungeons, and completing quests for the Dark Brotherhood and any miscellaneous quest givers. Alongside this, doing a bit of banditry and slaying Thalmor/Imperial soldier patrols, as well as the occasional wandering Noble, as well as enchanting and selling any decent gear I could grab, helped raise Speech, and fill my Septim purse.

When it came to Mages and Dragons, mages were quickly dealt with with the aid of followers, or a quick Whirlwind Sprint, and a few chops of the Rueful Axe. When it came to dragons, I pulled out the highest damage bow in my arsenal, and restricted myself to only using Iron, Orcish, Falmer, or Forsworn arrows, and began pelting them with arrows, alongside my follower. Later, a quick Dragonrend allowed me to melee them to death.

In the early days of the build, I at first chose to go with Sneak, using it to ambush my enemies with either a Stealth Roll+greatsword slash, or with a bow/crossbow hit from stealth. I later Legendaried this skill when I realized I wouldn't be using it too often, (Though you may keep it if you wish) and went for Speech. Alongside allowing me to persuade/intimidate with ease, it also made it possible to squeeze out more gold from trainers/merchants, with the Merchant perk, so I wouldn't have to scrounge too much for the items they would regularly take without this godsend of a perk.

Now, most of you were wondering, did blocking to mitigate damage ever come to mind when playing? Not really, as the armor, Berserk Rage if needed, the Ring of Namira, and a steady supply of healing potions rarely gave me a reason to go on the defensive. The only time I ever utilized a shield at all was the Targe of the Bloodied, and that was primarily for the added Bleed it does, and the badass spiked look. 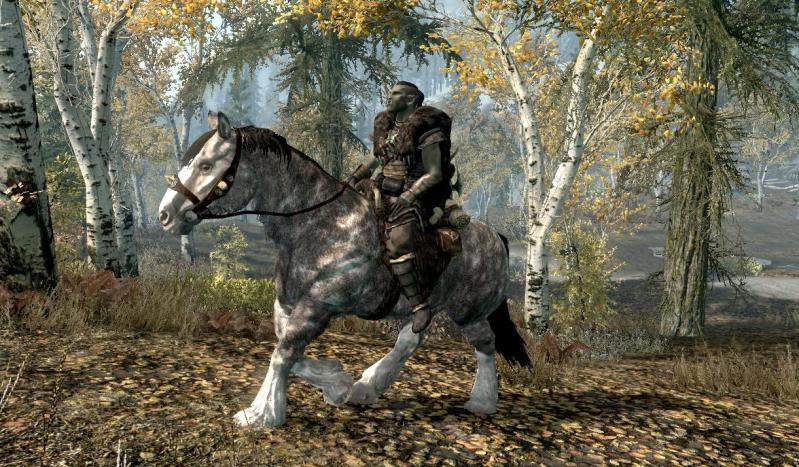 Patrolling around for some faces to smash in

Now, when it came to the Dark Brotherhood, I didn’t really do much sneaking. Infact, I acted more like the lovechild of the Volkihar’s Furia Bloodmouth, and Oblivion DB’s Gogron gro-Bolmog, ergo, I would often say the most threatening thing to my target, then smash their skulls in.

For much of this character´s early days, I spent my time either in full on Heavy Armor, or swapping out the cuirass for a Light Armor, such as the Hide Armor, cause I prioritized aesthetics over all else. Once you gain access to one, then the Forsworn Armor makes a better fit for the chest slot, with its skulls and whatnot. 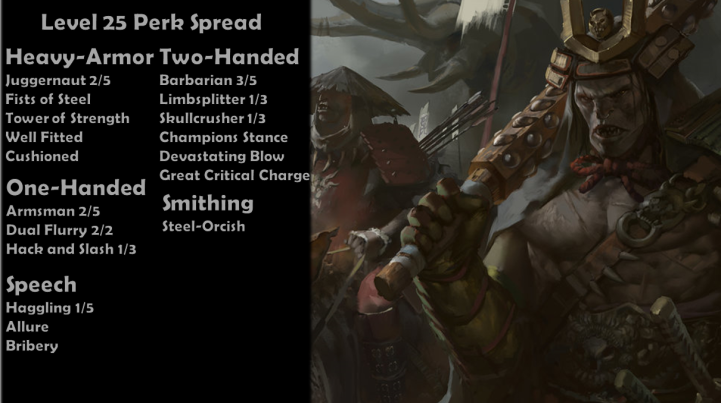 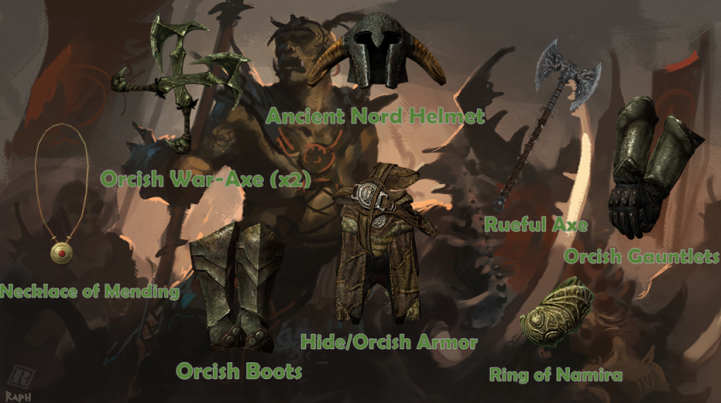 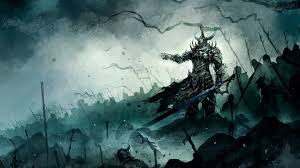 By the time Angron had come into his power, he led an army of over twenty thousand strong. While many of them were his fellow Uruks, he had also been joined by various mercenary companies, captured soldiers, peasants seeking to survive, mages, alongside their Atronach summons, and the undead, the Uruk spores planted into their brains. He now ruled Skyrim, and set his sights on holding it, and eventually, taking Tamriel.

-Saga of the Warchief

By the time you pass level 30 or so, you´ll want to have all your gear assembled by now. You should also be a Vampire Lord at this time (Though the form won't see much use). You should also have gotten Volendrung, as well as the Longhammer, and the Ebony Mail. If you´re lucky, then you may swap out the Ebony Mail for some Daedric Armor.

After using Atub, I slew her and the rest of her Stronghold, and raised them as my first little army. They weren't the best, but we could always get more along the way. With this in mind, and with either Arvak or Shadowmare as my mounts, I decided it was just about time for.... 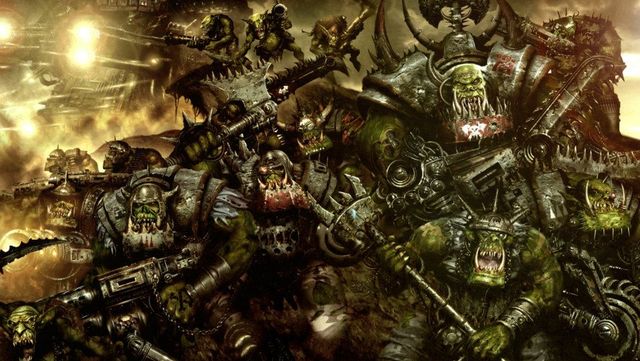 This is what it´s all been leading up to. Imagine this, a small, isolated village, such as Rorikstead, is enjoying a nice, peaceful afternoon. When all of a sudden, on the horizon, they appear. At the head is a towering, mounted, Orcish figure, clad in a horned helm, and and shadows wrapping around his body. He raises his mighty axe, as a horde of mercenaries, mages, undead, Daedra, and his other warriors charge into the town. They burn homes, crush any opposition, and even take some of the citizens captive.

You´ll be leading quite the sizable army by the time you´re finished with the playthrough. My followers consisted of my Uruk Magnar´s wife, Borgakh Steel-Heart, quest followers Delphine and Esbern (Who can summon a leveled Atronach), Serana, as well as any Thralls you´ve raised with the Ritual Stone. For those of you who don´t know, unequipping and reqeuipping the Aetherial Crown, with the Ritual Stone slotted in, allows us to reuse this normally once-per-day power as long as we want. So, even if our horde from Largashbur falls (They were weaklings anyhoof), we can raise them, alongside any other dead to fight for us, whether they be guards, or simple citizenry.

You´ll want to start with small towns first, raising them to join your army. Note, depending on the system you play on (and the type of laptop/PC if applicable), you may notice quite the large drop in framerate due to how many NPCs are in the same area at once, and all the combat. But its all worth it when you engage in epic, Lord of the Rings style battles! You´ll be racking up quite the bounty with all this rampant raiding and pillaging, but who cares? More attacks means more fodder to add to our army, and send into our foes, a tidal wave of smelly, moaning zombies. Remember to loot any decent loot you can find on your hordes, particularly high priced unenchanted armor and weapons, or most enchanted items.  This is the kind of playthrough where money won't be a problem. In fact, by the end of it, I had a little over 300K in gold.

Couple in your army with a hero from Sovengarde, or Odavhiing, and your foes will have little chance to stem your army streaming into your city. Think of this guy as Skyrim´s answer to Azog the Defiler. 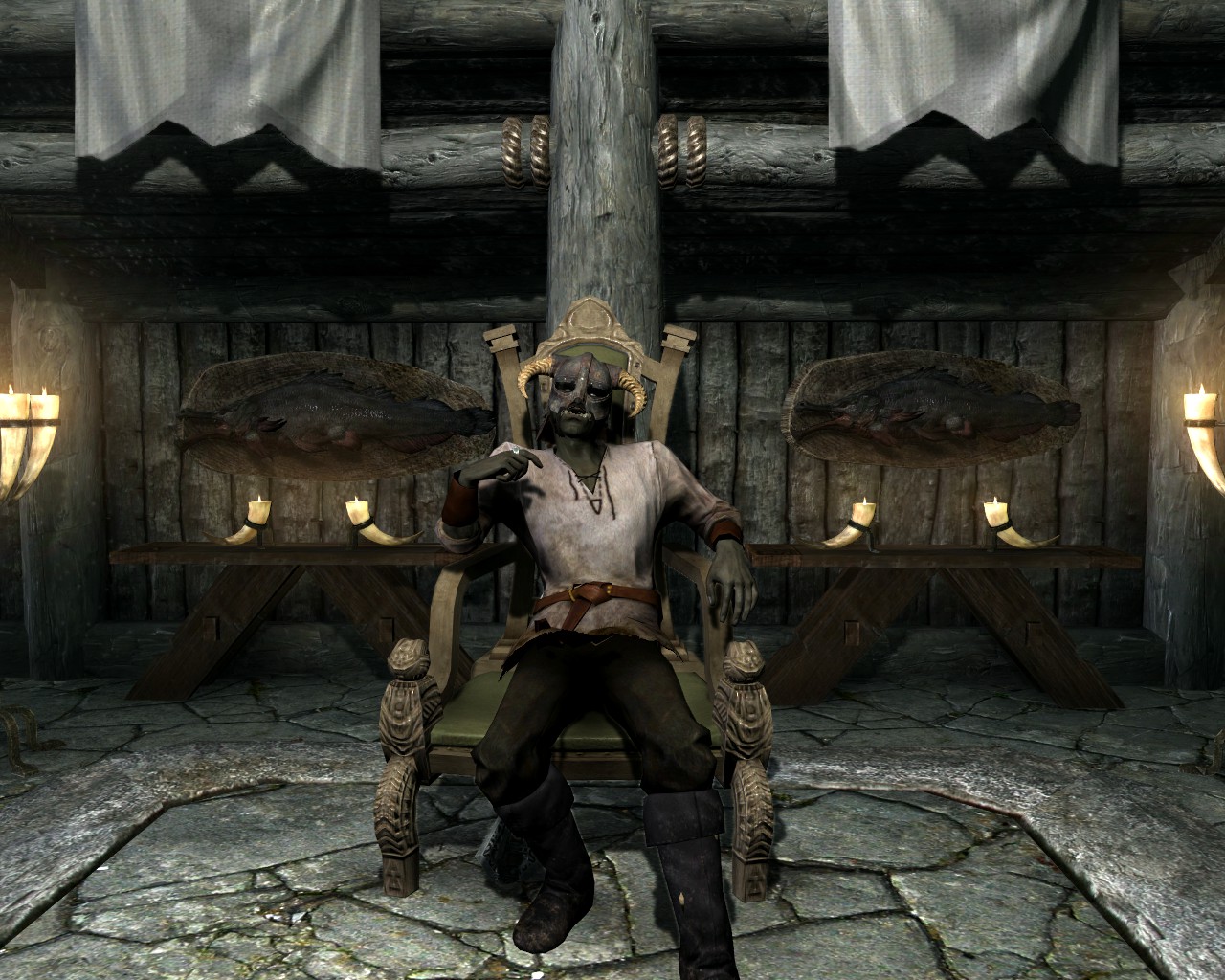 First Jarl of Falkreath, then all of Skyrim

Even here, I kept mostly in full Heavy Armor, though every now and again I´d throw on some Forsworn Armor, for a little variety. 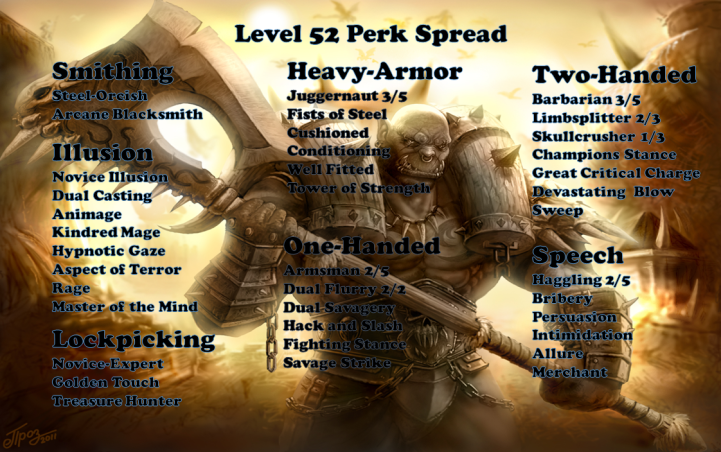 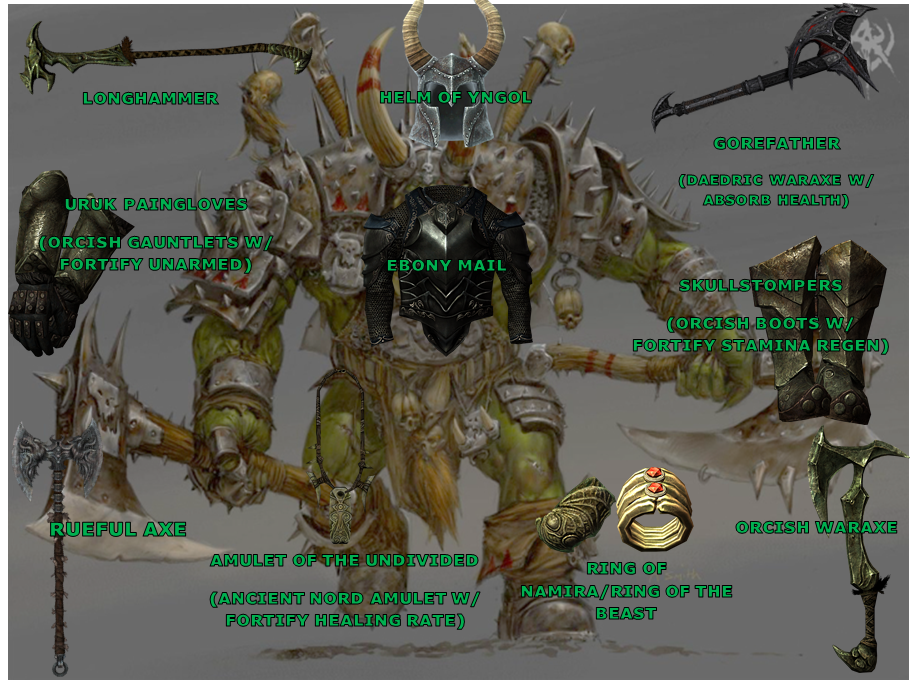 You may replace the Helm of Yngol with the Jagged Crown.

Horse Rush-Channeling the fury of Khornan, the Magnar inspires both himself, and his thralls, to shed blood and life in the name of the blood god, as they descend upon their foes.

Khornan’s Fury-Khornan gifts his champion with a small fractal of his unrelenting rage and power, turning the Uruk Magnar into a nigh unstoppable killing machine, or at least, more so than they already are.

Well, thank you, Warlord and Will, for the awesome spreads. And another thank you to the awesomeness that is Games Workshop, for creating the great Warhammer Fantasy and Warhammer 40K series.