Don't blink. Don't even blink. Blink and you're dead.

Too often, assassin characters end up following a very familiar pattern of gameplay: hide, kill once, hide again. Here, I attempt to deviate from that pattern without delving into dangerously enticing stealth-archer territory. Brutal efficiency is the goal, with a particular focus on cultivating the ability to kill well and often, and in the blink of an eye. The Slow Time shout is used extensively to perform stealth kill after stealth kill, assassinating the last person standing in a room full of baddies before the first body has even hit the floor.

As well as the shout, I've thrown in a few other gameplay mechanics to bring Doctor Who's Weeping Angels into Tamriel in a way that is as lore-friendly as possible, and good fun to play. But enough buildup, let's get to the build!

3E 241. The Dark Brotherhood was busy, their presence a looming shadow over Tamriel. When they aimed to spill blood, nobody stood in their way for very long.

Their secret to making a roaring trade out of death? An indifference to life, in the traditional sense, helped. Many of the Brotherhood's best assassins belonged to a clan of Dunmer vampires. Cold, brutal creatures that seemed to move and act outside of the constraints of conventional time.

Such power instilled fear. Fear that even other members of the Dark Brotherhood were not immune to. It seemed an internal revolt was inevitable, and when it came the vampires were hunted to near extinction.

The Brotherhood fell from power. 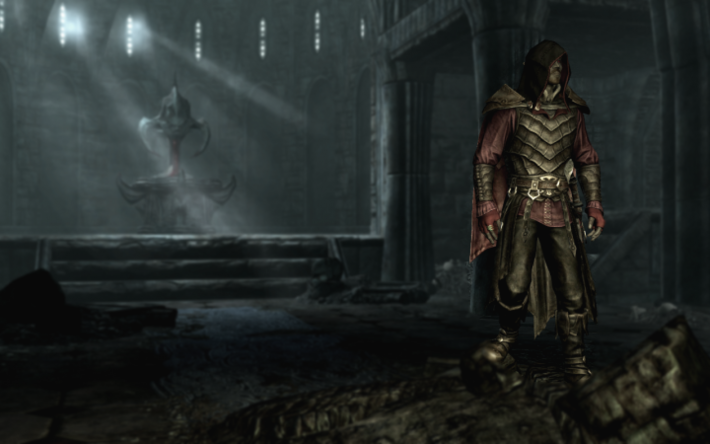 Stone: Mage, then the Atronach. 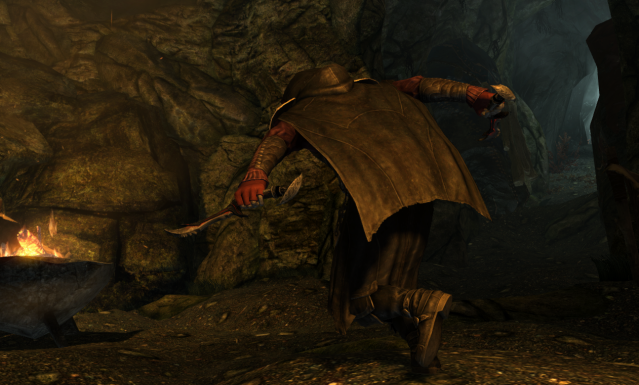 The Angel is predominantly an assassin, and so we'll be trying our hardest to clear rooms quickly and without being detected. The Slow Time shout is central here, so I'd suggest going far enough through the College and Dark Brotherhood questlines early-ish to pick up the shout's words of power. Under the effects of Slow Time, we'll be able to move around quite freely, steadily picking off individuals with successive and oh-so-satisfying backstabs. Movement while time is slowed can be a bit sluggish, but I found that once I unlocked 'Silent Roll' from the sneak tree, I could jump between targets very quickly without jeopardising my stealth. Even if detected and placed in combat, at its peak the Angel can still crouch in front of enemies and sneak attack them, thanks to the 'Shadow Warrior' perk.

Cutting down an entire bandit camp and watching bodies slowly fall to the floor before anyone has been able to draw a weapon will give you tingles, I promise.

Outside of stealth, we're also far from helpless. Re-animated corpses (or summons, if that's more your flavour) keep the heat off of us in situations where sneaking isn't an option. Light armour keeps the Angel protected enough to chip away at enemies until either everyone's dead or our shout meter has cooled down enough to enter Slow Time. For a change of pace, if we have a few enemies lined up, the Soul Tear shout will devastate and/or kill multiple targets- and then re-animate them to fight for us! Further, we'll have the Vampire Lord form at our disposal. Summoned gargoyles are not to be sneezed at, and there are a whole host of other VL abilities and attributes that are helpful outside of stealth.

Weapons: Dual bound daggers; the spell tome for the bound dagger can be bought off of Talvas Fathryon on Solstheim. If you hotkey the spell and tap it twice, you'll have a dagger in your right hand and your left for dual-wielding sneak attacks and combat.

*Equipment Note: Player-enchanted muffle items always have a magnitude of 100% regardless of enchanting skill level. If you find disenchantable muffled equipment, enchanting the Vampire Boots can help with stealth before you can acquire the 'Silence' perk. 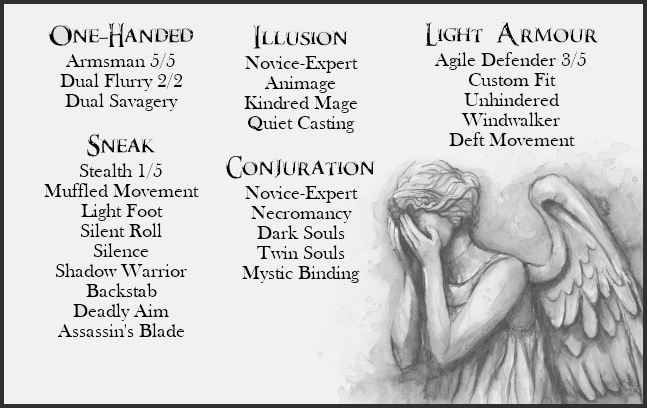 The Vampire Lord Form
Do not overlook the Vampire Lord form. It's a great panic button, and good for intense, large-scale battles. Drain Life spells are fantastic at keeping us alive, and it's also a blast to power through enemies, ripping into them with claws. Certainly not stealthy, but sometimes subtlety isn't called for. These are some of the VL perks I'd suggest:

Blink
Requires: Slow Time, Silence, Assassin's Blade
Impossible to defend against. Make every enemy in a room face away from you with a well-placed arrow, activate Slow Time, and roll between everybody, striking out as you pass. Use dual daggers for twice the damage if one isn't doing the trick.

Aid
Requires: Vampire Lord form, Drain Life
Used out of stealth, when health is low and there are numerous enemies. Weaken your foes and strengthen yourself with Drain Life projectiles.

Inhabit
Requires: Soul Tear/Bend Will, Quiet Casting.
When hidden, use either shout on a large group of enemies if you can't position yourself for Blink. Either all of them are bent to your will, or only a few are and chaos ensues. Either way, you remain unseen.

The dissolution of the Weeping Angel clan in the 3rd Era leaves you with a wide open space for your own backstory and roleplay elements. There are plenty of things for an assassin to do in Skyrim, after all. Regardless, here are a few suggestions:

The Avenger
Maybe you've existed for eons - you were a part of the original Weeping Angel clan. You're hell-bent on revenge for what the Dark Brotherhood did to your clan, and it looks as though they've resurfaced after hundreds of years. Awaken your weary body from its slumber and kill the killers. Incidentally, the Falkreath Dark Brotherhood sanctuary is a great place to try 'Blink', as all members of the DB are relatively close together and in an enclosed space.

Having been at rest for such a prolonged period of time, your Angel will need to train to become the great assassin it once was. The Thieves guild can help those looking to be unseen, and there are plenty of mercenary jobs available to hone your combat skills.

The Assassin-For-Hire
Maybe the whole Dark Brotherhood betrayal is water under the bridge for you. You're in the business for the wealth, and the Brotherhood can certainly get you there. Take any paying job you can get - your loyalty lies with the highest bidder.

The Aristocrat
Or maybe you should do what you're best at - remain unseen. Keep up appearances by becoming a thane of every hold, save Tamriel; all the while secretly working at beating a vampire's biggest weakness: the sun. Eliminate anyone who gets in your way, take care not to get caught, and target influential people who, upon their demise, leave behind powerful positions ripe for the taking by yourself or your accomplices. When all's taken care of, wash your hands, and revert back to the innocent noble everyone thinks you are.

The Weeping Angel has gone through further changes. As many people - including myself - have started using the unofficial patches, I've taken away this build's previous reliance on several glitches. I've also altered its skillset and I feel it's now closer to what I've always envisioned my character being.