I sing of Battle and Rebellion!

Behold, O Akatosh, Lord of Fire and King of the Gods,

Dueling a dozen il-fated men, and, like a storm, crashing into their ranks

Fighting the red-draped soldiers of The Empire, with the aid of his rose-red Dragon, and

All fell through his wrath and skill.

O, Acillus greatest of all warriors

Chosen of the Gods,

Harbinger of the Companions,

Master of Arms and Lord of Battle,

Whose decisions are lighting- quick and cracking,

And moods are a constant sea of storms, now,

Stands at the gates of his destiny, as he himself once prophesied.

For after the destruction of Alduin the World-Eater,

In the depth of the Halls of the Dead

Great Acillus stood amongst the finest of all Nord warriors and said,

‘My brothers and sisters, I have never fought with iron and steel,

but with heart and spirit.

Listening closely to weeping of emotions, and

Attentively to the quiet howling of the winds fate;

My home is torn and tattered;

Ruled over by a Crimson Servant in the name of golden-skinned Serpents.

Now, at our most desperate, all who stand are

So I will banish this darkness!

They may challenge my power,

They may defeat me in strategy,

They cannot claim my Divine right!

They cannot match my skill!

A new Sun must rise!

And until it does the world will run red

Race: Imperial-  Compliment the skills in the build nicely, and fit the role-play.


Standing Stone: Warrior to Atronach- the former is for leveling, and the latter is to not get obliterated by mages.

Stat Distribution: Stamina: 2/ Health: 1/ Magicka: 0- Acillus is a very aggressive and versatile warrior, who needs a large stamina pool to be effective in battle, sacraficing a bit of endurance for agility. A novice-apprentice in the field Magic,  you'll be using low-level spells throughout your playthrough, but, magicka is increased through enchanting. 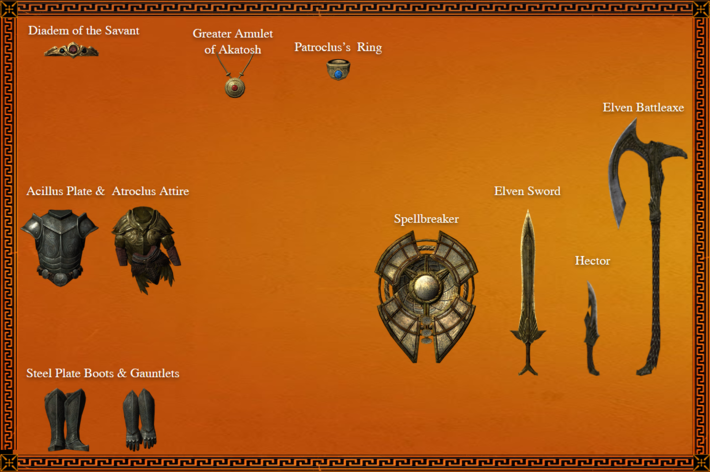 All the weapons and armours can be picked up naturally, bewteen the levels 20-25, as you go along your adventures, with the exception of Spellbreaker, which I got at level 25 and after changing my Standing Stone to the Atronach. The Diadem of the Savant which you can pick up near Froki's Shack, or from Shalidor's Maze.

For the early game recommend using the Steel or Wolf set, with fur armour acting as your Featherweight stance, and using steel weapons with matching shield, topped off with an enchanted dagger of soul trap. One-handed- One of the two main damage dealers, one-handed is coupled with a shield, or spell, or in isolation to make use of parrying and dodging. There’s a strong preference to swords, and no dual wielding.

Two-handed- Second damage dealing skill, two-handed has strong focus on axes, and is used just as much as one-handed.

Block- The greatest utility skill, you’ll be using it to block strikes, dodge out of power attacks, or bashing opponents of balance, though, it is focused on the aggressive side, rather than protective.

Heavy Armour- The main defensive tool in your kit, giving you a nice reduction in being staggered and an increase in your survivability.

Enchanting- Lightly used and easily leveled; only the armours and jewelry are enchanted, with the only exception being daggers for trapping souls.

Restoration- Developed completely naturally, restoration is used for light healing for yourself, your followers, and nothing more- it’s also an easy way to role-play having a divine or holy aspect to the character.

Speech-  For haggling in the markets, and to being better negotiator and briber.

Mechanically, Acillus plays as an exceptionally proficient warrior, with his ‘special power’ being the ability to switch ‘stances’ from a Heavyweight, a crusader-like fighter, to a

Featherweight, lightly-armoured barbarian. This is achieved through the wearing of, either, the Acillus Plate or Atroclus Attire, with each providing a magical buff to their playstyle, but sacrificing another element of combat in return.

I highly encourage you to play around with all the skills, armours, and weapons at your disposal to develop your own style of fighting and fun, but, with that being said, here are the main styles I played with:

The Swarmer ( Atroclus Attire + Battle-Axe) is a standard barbarian playstyle that falls under the Featherweight stance. A typical glass cannon, this style suffers from a major lack in defence, but counters through strong offense and high mobility, as well as a magically increased agility. Through the Attire’s benefits, and the abuse of the Quick Reflexes, this combination was the perfect shock attack and battle initiator; perfect for thinning and controlling herds of enemies through Great Critical Charges or Sweeping blows. Ill-armoured mages, who are easily overwhelmed, are a key target in every battle. However, the dueling capabilities of this stance is risky at best, as the switch between Axe and shield-and-spell were the cause of many reloads, and, sometimes, Quick Reflexes just isn’t enough as you either trap yourself in a tight space, or fail to dodge. Still, the damage from power attacks is significant enough to quickly end any dangerous duels, if timed correctly.

In juxtaposition, the heavy-set Puncher-Knight (Acillus Plate + Spellbreaker) is the most defensive of the strances, allowing you to get close to archers and mages unharmed, or tank menacing blows. The main game changer is the addition of Spellbreaker, giving you greater protective power and a near-impenetrable magical barrier, perfect for closing in on mages or shrugging off dragon shouts. Acillus Plate provides an increased spell cost reduction to restoration allowing you to heal more often, and eases magicka management (be careful though, the 50% reduction in regeneration is brutal.) This is the perfect style when you get backed up in a corner, and need to create space, or face tougher enemies. When space is created you can quickly switch to a Featherweight stance, and charge out of there, moreover, this the most able dueling playstyle with increased protection, greater health sustainability, and medium level damage.

The gladiator-like Outer-Fighter (Atroclus Attire + Spellbreaker) combines the protectiveness of the Puncher-Knight and the mobility and agility of the Swarmer. A hybrid

playstyle, this is more duel focused, when the opponent you're facing is too powerful to fully commit to damage, but a bit slow in fighting. The shield can better protect undodgeable blows, or give you time (through bashing) for quick heal, while the Attire ensures you’ll have more than enough stamina to power attack or bash your opponent to oblivion, with power bashing being the go-to stagger maneuver.

The Slugger (Acillus Plate + Battle-Axe)  is the exact-opposite of the Swarmer. A Heavyweight stance, the Slugger is the most brutish of all playstyle relying on heavy power attack, as your armour saves you from hard blows. Though the extra weight reduces mobility, Quick Reflexes equalizes this by allowing sharp turn maneuvers, which aren’t nearly as freeing as the Swarmer, it serves its purpose in doding power attacks. The main weakness being the extreme stamina drain, and lack of magical protection

Shouts were more to open enemies up, and stun groups of foes, making it safer to charge, or turn animals against their masters, conjure storms, clear the weather for clearer view of the battlefield, and increase attack speed.

An extremely confident, but emotionally turbulent man, Acillus is a character more dangerous to himself than any opponent he faces. Due to constant praise (by both the people and himself), he has a very large, yet fragile, ego that is easily scared by anyone or anything, though, this is incurred on himself

through his excessive bragging and terrible narcissism. This is made even worse with his continued… shall we say ‘special friending’ of both men and women, though this grinds to a halt once he has chosen his soulmate.

Speaking of soulmates, Acillus is quite the religious man- surprisingly. However, you won’t find him praying regularly at any shrine, nor obeying the words of one Divine, nor handing out food to the hungry. Rather, Acillus is a believer of poems and prophecy, taking note of the weather, the sound of the ravens crowing, dreams, nightmares, what his ‘feelings’ or ‘instincts’ say, and the arrangement of the stars. It is this superstition that leads him to believe that, because he is the only one that can destroy Alduin, he cannot be killed by any man, mer, or beast, leading to his overconfidence and fearlessness.

Often drunk, Acillus loves to be the center of attention, and is especially fond of fine wine, expensive jewelry, and delicately crafted arms and armours. These eccentric habits bleed into his social life as he can often be found in the court of most Jarls, or seeing what must be done for him to be crowned a thane.

All things said, Acillus is an opportunist at heart and does not suffer from any nightmares in betraying a client for higher pay, or in deceitful deals- the only exception being when the opponent is more powerful than the person or entity he’s fighting for, as ultimately, Acillus is a (borderline insane) warrior who loves the challenge of a good battle, and the blood and adrenaline rush of fights.

Underneath all this, Acillus does genuinely try to be a ‘Heroically-Good’ Dragonborn, with Talos as his ideal, but this effort is rarely displayed, as he is overcome with the will of the dragon. A quiet guilt rests in  his stomach during peaceful moments, which is illustrated by his charity to the poor.

Companions- A great way to develop your all skills early on, and give your playthrough a sense of purpose and family. This’ll be the first major questline to join, then moving to

the Main & Civil War Questlines. I stayed a werewolf, since Imperials aren’t sent to any ‘Warrior Heavens,’ the Hunting Grounds are the closest thing to it.

Main & Civil War Questlines- You’ll want to join the Imperials first, which will lead you into the main questline, but betray them to the Stormcloaks when returning the Jagged Crown. To fit the role-play, it’s best to alternate between the two as you play.

A Night to Remember- Of course.

Forsworn Conspiracy- Nicely ties in with Night to Remember, making the quest start naturally. You’re going to kill all the guards and flee the city, then, when you start the civil war quest line, you can take over Markarth and your bounty will be lifted- at least I think so, I never went back.

A Few Words with You- Now, this is not a single quest, but multiple mini-quests that are an immersive way to get yourself into trouble, before running away from the town/city/hold you're in.

Extras- These are mini-facts about the build and its development.

And with that I can go to sleep. Any thoughts and criticisms are welcome, if you spot any grammar mistakes let me know. Have a wonderful, and goodbye.