Greetings and salutations, my fellow Skyrimmers. It’s been a hot minute since my last build, and I couldn’t decide which to write up as my next, then this contest dropped. As someone who has played Vanilla for a little over a year now after a long while of modding, I got hooked. I may even write stories about the adventures of Scherenzar Owl-Logic at a later date and time. Plus, as the contest was dropping, I was on a bit of a detective kick. So, wanting to make a relatively normal, non Dragonborn character, welcome to the adventures of…. 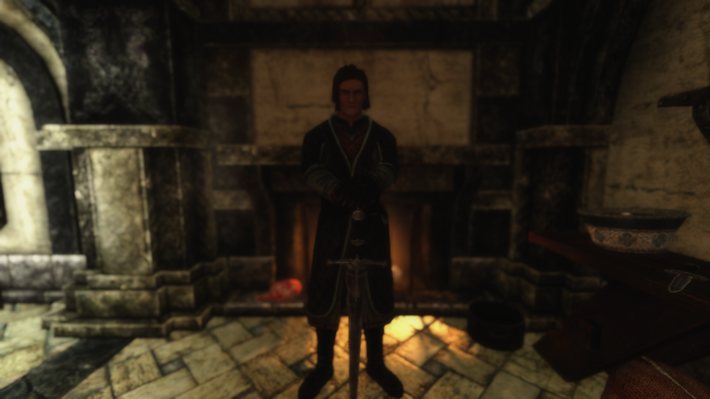 Is an introduction truly necessary? I am a detective. If you desired a hero, I'm afraid I must inform you that you've run into a bit of bad luck, but if an investigator or a reasoner is what you wished for, you've pulled a decent card.

When I first came to Skyrim, it was due to rumors of dragons appearing. I first arrived in the ruins of Helgen, where a dragon was said to have attacked, all that led me to find was a burnt journal, and more questions. As I did, I had to do two things. One, report this to the Jarl, and secondly, discover why the Dov have returned to Mundus…. 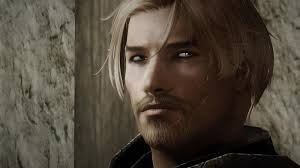 Race: Nord, not only would a trueborn son of the North know the land better, the +5 bonuses to Block, One-Handed, and Speech are useful to start out with, plus the 50% Resistance to Frost, while it doesn’t hinder the Slow effect, it does mitigate a good chunk of the damage.

Difficulty Tested: As usual for me, Adept, cause I’m not insane enough to take a completely unarmored, Wooden Sword wielding detective to higher difficulties.

Standing Stone: The Warrior or The Thief to start out with for leveling purposes, then to help boost our rather minimal defense, swap over to the Lord, for the 25% buff to Magic Resistance and 50 AR.

Stat Spread: 0/2/3 in Magicka, Health, and Stamina. Aside from the occasional Flames spell to activate oil pools, magicka was not used at all. Stop putting points into Health at 170.

Shouts: Aside from a Word of Marked fpr Death, NONE! You ain’t no damn hero out to save the world, nor some Dragonborn. 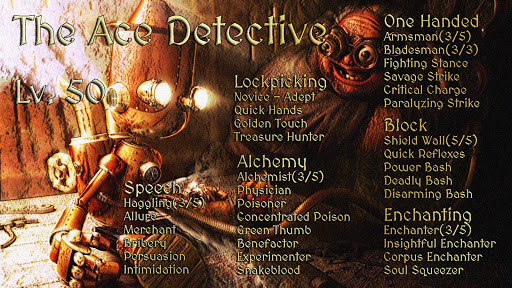 One-Handed: Used primarily to help with the damage of our sole weapon, a plain Wooden Sword, which you do need Hearthfire to obtain.

Block: Even with only the 50 AR granted by the Lord Stone, that can only take us so farr. Without a shield, you’ll have to try and dodge arrows, though this will help with defense from melee weapons.

Enchanting-Primarily used to buff ourselves as we’re running around in, albeit rather fancy, clothes, and to make the Wooden Sword even more viable.

Alchemy-Used both to buff our character, and to an extent your follower, this will also be used to debilitate and weaken your enemies, softening up for your Wooden Sword to whack them down.

Lockpicking-What detective hasn’t had to jimmy their way into a suspect’s home, or rifle through a locked container or whatnot to try and find evidence?

Speech-Primarily an RP tool, representing how a skilled sleuth can weasel info out of a hesitant perp, or bluff their way into places they may not normally be allowed access. 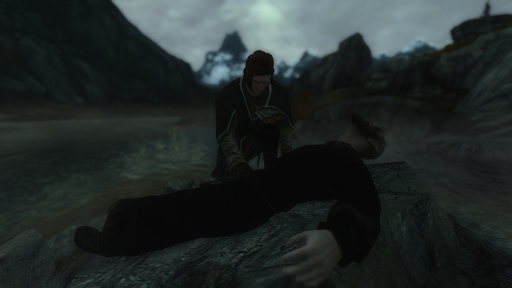 Hmm, judging from the fact his Septims are still on him, the lack of any weapon wounds, and the prints on the overhang, I deduce this mage fell to his untimely demise.

Combat as the Ace Detective didn’t start off, if I could help it, by me waltzing up to my foes, and then murderizing them as I normally would, rather, as a detective, I would, as in some cases with some of my cases, try and analyze a fight. Even without any perks in sneak, the relative noise given off when unarmored, Shrouded Shoes, a Fortify Sneak potion, and an optional Invisibility potion if I was really paranoid, helped. I’d try and get to a vantage point, like say, an overhang or roof or the like, and try and scan out what enemies there were, and if I could, what they were adorned in. Were they all low tier bandits, decked out in only fur and hide, with either basic spells and iron weapons? Are they all mages, whose “armor” may, minus some exceptions like Southfringe Sanctuary, would be Flesh spells? Or are they, say, all vampires, lightly/unarmored yes, but with their spells and necromancy, they can spell trouble? Use arrows to lure enemies away from larger groups to make them easier to pick off, or, if applicable, say in Halted Stream Camp, knock down one of the overhanging firepots to ignite the oil to deal with the two weaker Bandits, and weaken the Bandit Chief. As someone who prefers to let his enemies duke it out rather than fight himself, sometimes, if I had acquired one, I’d use a Staff of Frenzy, or a Scroll, and let my foes weaken/kill each other, and deal with the stragglers.

Once that was done, I’d start by picking my battles. I’d go for the ranged fighters, like Archers, first, as they are less easy to deal with, whereas, in my opinion, melee fighters can be kited. Combat as the Ace Detective is like a duelist. Ergo, use a mixture of blocking, bashing, and Quick Reflexes to keep your enemy from hitting you, stay mobile, and slowly, like a chisel to a block of marble, whittle your enemies’ health down, with some aid from your companion, who in essence will be your Dr. John Watson. Use Battle Cry to get some breathing room and heal if you’re getting overwhelmed. Use Marked for Death to further boost your Wooden Sword’s damage

Undead can be dispatched, primarily if there are any oil pots or oil spills to ignite, fairly easily through using the damage over time fire spells grant, in bursts, boosted by Fortify Destruction potions, and help from a follower, chipping them down, particularly useful if you’ve equipped them with a Fire Damage enchanted Silver Sword, and especially if your foe is a vampire.

The major foe I had was dragons. Now, unlike normal, as this character is not Dragonborn, I didn’t actively seek out Word Walls, though dragons were still a hassle. Simply put, as this character is a Detective, not a hero, I chose to often flee dragon battles, using terrain such as the amazingly fireproof trees, or rocks, and such, to avoid all/most of their breath’s damage, though Frost dragons were easier to handle, what with both the Lord Stone and a Nord’s Frost Resistance to mitigate a good chunk of the damage. You may be a Nord, but you’d rather not be sent to Sovngarde via dragon digestion.

If things came to worse and I was disarmed by a pesky Draugr, and I wasn’t able to easily retrieve my wooden blade, I’d chug down a potion of Fortify Marksman, which, despite the name, can modify non archery based damage, such as Unarmed, and start embracing my inner pugilist and beating them down.

Follower wise, I went with at first Mercurio, due to him being a fairly good mage follower, and then once I got to Solstheim, I dumped him and struck a partnership with good old, snarky, Teldryn Sero.

Quest wise, I did the Main Quest up till finishing Dragon Rising, then dropping it, the College of Winterhold to solve the rumors of the mages discovering something under Saarthal, though stopping it after Hitting the Books, In my Time of Need (Siding with the Alik'r, as, both myself and Scherenzar would find it more likely that an individual would sell out a city rather than a group of what seem like rebels as well as other details.), Laid to Rest, Destroy the Dark Brotherhood (In part for Marked for Death), investigating and “confiscating” the skooma in Riften, The Forsworn Conspiracy (Siding with, albeit reluctantly, the Silver-Bloods), and of course, the ultimate in sleuthing sidequests, Blood on the Ice. 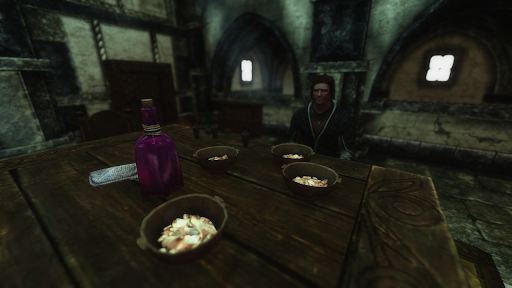 In the absence of any intriguing cases, I stimulate my mind  through….other means. 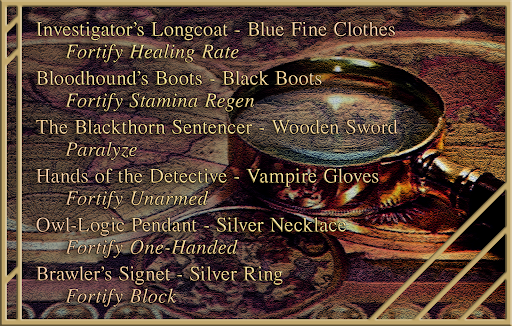 Fungal Rot-This little toxin, concocted from bits of flesh mixed in with some of the local fungi, paralyzes the afflicted, while sapping their life essence.

Slowpoke Solution-A simple, yet effective, little mixture. Once taken in by the veins, the imbiber will begin to slow down their movements, and they will be out of breath faster.

Fireheart Brandy-An alcoholic brew of my own creation. It gives the drinker a good kick up in terms of vigor, though gives quite the headache once the drinker sobers up.

Playing as a regular old working Joe, to an extent, is always a fun way to play. No worrying about stopping Alduin. Try and eat three square meals a day, sleep about eight hours, and try and solve problems via Persuasion/Intimidation/Bribery. The Ace Detective isn’t a stranger to roughhousing, but he prefers to solve his problems with his mind and words, rather than fists.

As per the Sherlock inspiration, when not on duty, in the absence of cocaine and such, I’d have my Detective indulge in Skooma, Redwater Skooma, Sleeping Tree Sap, and Moon Sugar.

Always keep your “cane”, IE your wooden sword on you. You never wish to go unarmed, especially if your travels take you to Riften.

Do not marry, or have female companions, as they would distract you from logic and your deductive work. Though, perhaps later in the playthrough, maybe entertain the idea of settling down with a family….

Well, this was quite the adventure. Taking me a little over two months to build, this went through ups and downs, and lots of thought into how to play a detective, something I’ve played with on and off during my Skyrim journeys. Thanks to Erinoth for the amazing spreads, and thanks to Heroofknackers for aid with the screenshots, you’re lifesavers. And, as always, thank you, dear reader, for taking time to skim through my build. 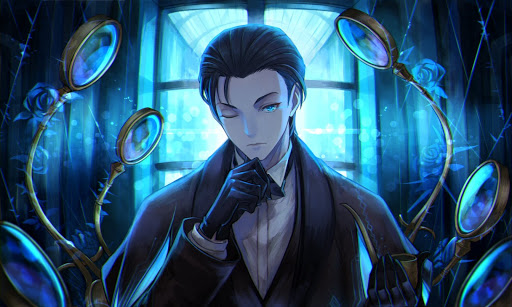 It is elementary to like this build, isn’t it, dear reader?