Happy holidays & Merry Christmas everyone! Here's my build for this month's event. This was Lee Fiskillis idea, albeit more dark and twisted version of his idea, but... I like darker builds... so, hope I did ya proud, buddy.

The Black Priest of Mara Maramal was never the quiet type. Always making sure his opinion is heard, always preaching to the people of Riften on the streets with unshakable confidence. You’d think a priest’s life would be… quieter.

‘What do you want, Maramal?’ I replied, ‘ it’s early in the morning and not everyone’s awake; can you keep it down too, please?’

‘… alright,’ I respond, with a less-than-subtle confused face.

As we walked the halls of the Temple of Mara, Maramal’s head would not stay its place, constantly shaking from left to right rapidly, as he murmured a whisper of words, with little, hearable occasions of ‘No’s,’ ‘Oh dears,’ and ‘he couldn’t have been,’ spurred throughout. Unfortunately, I got infected too– my heart sinking for every step I took.

‘Now, what’s gotten into you?’ I say with a concerned tone, ‘It’s not like you to act this way,’ and with out a second’s notice, he turned with a face full of fear and said: ‘Did… di– I mean was– was she here?’

‘Who was here?’ I say understandably confused. ‘The Priest– black, she wears black. They say she used to live here, and she was in the Orphanage, but then you took her in– she’s a priest? Right? Oh Gods, oh Mara…’ gulping, shaking, and brought to the point of tears I didn’t know what to do.

Tell him? Well, he might lose it even further. Don’t tell him, and he’ll go insane with all this paranoia. I… I just froze, as silence over took us.

‘Yes. I she used to live here.’ As soon as I uttered that Maramal turned with a face full of relief. ‘Okay, okay,’ he said, ‘that’s good, well, at least– well, is– who– they say she's alive and I’m afraid that… that–’

‘Easy. First, we’ll go drink some water then come back here, okay? I’ll tell you all I know.’

‘Okay. That sounds good,’ he said.

Together, we went to get some water and returned to the garden. I sat on the ground and invited Maramal to sit next to me, he accepted.

‘The Black Priest was brought to the temple by me, in that you are correct. She was just a young girl, newly orphaned.’

‘What happened?’ Maramal asked, much calmer now. ‘Her mother was assassinated,’ I replied, ‘She’d always been staunchly against the Black-Briars and was a continuous voice of frustration and anger towards their less-than-civil practices.’

‘So, her words caught up with her,’ he said, ‘and the Black-Briars got tired and ordered a hit on here. Divines, that poor woman.’

‘My thoughts exactly,’ I said, ‘after hearing the whole story, I just couldn’t watch and do nothing,– I went a head an adopted her: the youngest acolyte ever to join the Temple.’

‘Anger.... anger and fear,’ I replied quietly, ‘angry at the Brotherhood for taking her mother, and fearing what may happen next.’

‘I guess so,’ I replied, ‘she was quiet, maybe too quiet at times, with a constant piecing stare tattooed on her face. But she was, and still remains, the most devout person I have ever met. Her commitment to Mara was unending– she saw here as her own mother.’

Pulling my feet, I bring my knees to my face, and wrap my arms around my legs.

‘She’d… she’d wake up in the middle of the night and hug the statue of Mara so tightly I swear she’d bend the very metal,’ I said, ‘I never forgot that sight… every time I look at the statue I’m always haunted by that imagine.’

‘Why?’ He asked, confused by my words, ‘I thought it’d break your heart.’

‘Her eyes.’ I said, ‘Her eyes are what haunt me. She looked at me like I’d see her murder someone, the look of horror and disgust, as if I violated a secret ritual was just… overwhelming. ’

‘Hmm, I get your point now,’ he replied. Putting a hand on my shoulder, and bringing himself closer to me. ‘You don’t have to say anymore.’

‘Murderer.’ I utter. ‘What!’ Maramal yelled, wide-eyed and jolting backwards, ‘What, what d-did you say,’

‘She murdered a noblemen… caught her stealing, and she… she said it was an accident, but ain’t no accident to bludgeon a man skull in. They barely found enough of him to burry. ’

‘Divines,’ Maramal said, arms and hands wrapped around his stomach, and rocking back and forth.

‘I knew she stole from noblemen,’ I said, ‘I tried to talk her out of it so many times, but she  always brought the gold to the Temple, and I’d be lying if I didn’t say she helped a lot of people with those coins. But, after the nobleman’s death, people were understandably afraid of such a mad character, and she was ordered to be executed outside city walls. She treated her execution like a congregation: shouting, yelling, screaming about how all must obey accept Mara’s love, all must bow to Mara, and if they don’t…. well, she'll be back. ’

‘That’s enough.’ Maramal said, standing up and marching away.

I still hear her screams. Her howls. Eight bodies were discovered buried in shallow graves just under city walls. ‘Sinners’ was etched into their skin with an axe.

She kept calling Mara her mother… Divines, what a twisted creature.

If I could’ve helped her– I would’ve.

If I could forget her screams– I would.

Race: Any. All races can fit this build, though; I will admit the story leans itself towards a more human or Elven protagonist. I chose Imperial.

Stat Distribution: Magicka/ Health/ Stamina– 1/ 1/ 1– The regular stats for a thief just made to be an even spread due to the use of Restoration.

Standing Stone: Thief –> Shadow. Thief will help you out leveling, while the Shadow will help with the ‘Oh Shit’ moments. 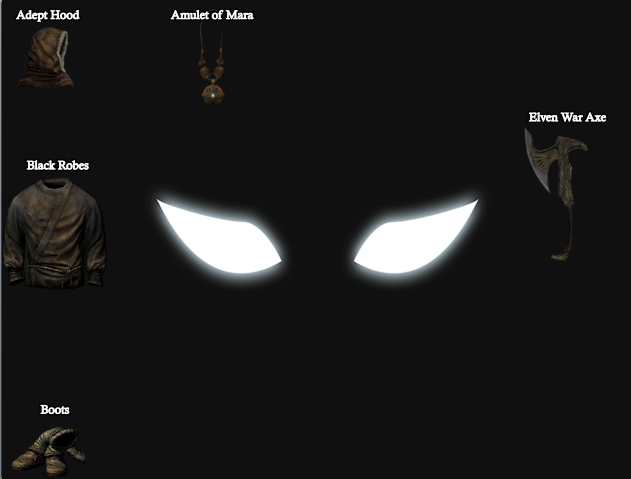 All of the equipment is super easy to get as everything can be bought from Radiant Raiment in Solitude, while you'll just naturally come across the axe. One-Handed– The axe is the weapon of choice for the build as it doesn’t have the holy appearance of a mace, nor the chivalrous connotation of the sword– a perfect weapon for a twisted Holy Thief Crusader. The Hack & Slash perks are also very useful in shortening long battles.

Block– A thief has to be quick on her feet…seriously, one hit and that health is gone, luckily, Quick Reflexes makes the task of dodging a lot easier.

Restoration– Come one, you had have seen this coming. Of course you’re a healer, what better occupation for a priest?

Sneak- Can’t be a thief if you can’t sneak, now, can you? This will be used in tandem with pickpocketing to make you undetectable.

Pickpocketing– You’re a thief first and a combatant seconded, so you’ll need to be good in the whole stealing department.

If find a fort or dungeon filled with bandit, it’s best to first: scout the area; see how many guards there are, how they patrol the fort, and which one will give you the most trouble.

Secondly, see if you can take the weapons of them– not all of them, that’d been near impossible, but when you have 10 equipped bandits rather than 20, well, you’ve effectively rendered half the destructive force useless.

Usually, this is how many of my encounters played out… and ended.

However, if things go bad, and you found yourself cornered– surrounded by more-than-equipped bandits… Run! Just Run! Then, go back and KIL THEM AL- I mean, kindly introduce your hands to their weapons and gold, then wholesomely show that your axe does, in fact, look much better when it is implanted in their face. Afterwards, say your goodbyes and off you are to another MASSAC- I mean… congregation.

After getting the Respite perk, combat becomes much more… doable.

This is a very twisted, and demonic character– believing himself to be the most devout of Mara’s disciple, and the holiest of men and mer, thus anything you do is in the name of Mara… whether it be charity or… murder.

Any gold you steal, and gold at all, will be used brought back to the Temple of Mara and place in drawers or donated, or reverse pickpocketed into the pockets of the poor and forgotten.

You’re always ready to lend a hand to the need… though, if you get caught robing a house… well, even if they are innocent, you know what must be down.

But, remember… all who harm, pillage, and do not follow the teaching of the divines must be… shall we say, permanently ‘dealt with.’