Greetings and salutations everypony, to my latest build, my contribution to the lovely Secret Santa Build Event, and, as he was the name I was assigned, a gift for Ramses. Merry Christmas dude! Ramses wanted a build based on the Krampus, so give a dark Christmas welcome to….

Karol of the Bells The kittens gathered around as the aged Clan-Mother, Ahkari, began her tale. “The time of New Life is almost upon us, little ones. Though, be warned, for this one shall tell you a tale that this one hopes will keep you good.” She cleared her throat. “Your mothers and fathers have surely told you of the Dro-m’Athra, those shadowy cats that lurk in the Great Darkness of Namiira, no?” the kits nodded. “Good, well, one you all especially should watch out for, is named Kra-m’Athra.

This fiend is said to, unlike the Rahjin who aids you in agility and cleverness, or Uncle Sweetshare, who gives sweets and Moon Sugar to those who have been good, the Kra-m’Athra brings punishment. If he catches a naughty soul, then he snatches them up,” at this, Ahkari pantomimed the action, causing a few kits to scoot away in fright, as the old molly chuckled. “After, he spirits them away to the Great Darkness, and for a year he beats them with a wooden blade, he shows them horrifying images, he places unclean spirits in the dead, raising them, and worse. Once the year is up, he deposits them back to whence they came.” She smirked. “But don’t worry, little ones…. 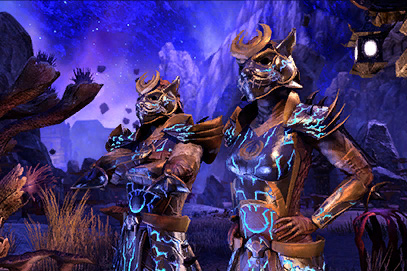 Race: As you can guess from the lore, you’ll play as a Khajiit. Not only do the +12 Claws Damage help if you find yourself unarmed, but so do the +5 bonuses to One-Handed and Lockpicking. Adding in Vampire Lord adds in some other buffs to Conjuration and Illusion.

Standing Stone: The Mage to start out with for leveling purposes, then swap over to the Lover for more leveling, finally capping it with The Lady, boosted with Fortify Restoration purposes. Following Hadvar into Helgen (Cause let’s face it, he has better benefits than following Ralof. I mean, you can easily get Girda friendly by chopping firewood and selling some to her husband, you’ll want to grab at least an Iron Sword, the Fur Gauntlets and Boots off any of the Stormcloaks you murder the fuck out of, Lockpick any of the cells, grabbing the Novice Hood and Robes for disenchantment, then move on. Use a mixture of Flames and One-Handed in order to help you level.

Now, gear wise, this character is fairly simple. After you leave Helgen, head on and kill the bandit outside Embershard, and keep his armor if it is the shirtless fur variant, sell it otherwise, as for footwraps, well, you’ll have them on by default. Wooden Swords you can ONLY get if you have Hearthfire, and can be found in pretty much any dresser, drawer, wardrobe, etc, throughout Skyrim.

Combat wise, here’s where it gets fun. First off, use fear spells on weaker foes, except one, who you will kill, then raise to help you out as both meatshield, and temporary follower. After that, use any remaining Magicka to pop down Runes or Soul Trap, and start swinging. Focus primarily on dealing with Archers and Casters, er, mages first, especially fire mages, as being a vampire will let them do increased damage to you, and that aside, they’re more dangerous than two-handers as they can KO you from range, and generally hit faster than two-handed bois. Alongside this, if you can group up your enemies, or get them into a chokepoint, like a corridor or doorway, pop up a Rune to deal AOE damage, or immobilization if you use Ash Rune.

Dragons, prior to getting Dragonrend, will be dealt with via raised mage based thralls, the occasional blast of Frost or Fire Breath,and, of course, hiding behind the fire/frost resistant trees, and once they land, hit them with Marked for Death, then start wailing on them with your blade. Until I got my Enchanting up, which also got my Speech up, and any other skills I trained if they also doubled as a Merchant, I used either the Blades Sword I picked up from Delphine’s secret room, or an Orcish Sword I picked up from Borgakh Steel-Heart.Poisoning those with any damage health poisons I had, I would then begin whaling on the dragon until they were either dead, or flew back up.

However if, say, a Draugr Deathlord or the like uses Disarm on you, then you have your claws to back you up, or if you just want to beat someone’s face in. 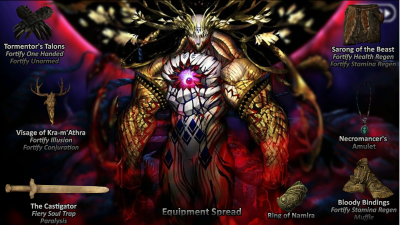 And now we come to the quests, and targets for punishment. Let’s break it down….

Ulfric Stormcloak-Kingslayer, Jarl of Markarth, and rebel. Oh yes, Ulfric Stormcloak has a lot to answer for. Oh yeah, and depending on how you see the Reachmen, and Forsworn, hypocritically subjugating one people for their faith, while fighting the Empire and Thalmor in defense of his own. (Civil War-Empire)

Madanach-Rebel, Forsworn, and King in Rags. Madanach, alongside Thonar Silver-Blood, have had their enemies killed or jailed, and Madanach, in his escape from Cidnha Mine, kills all in his way, innocent or otherwise. (Kill Madanach-No One Escapes Cidnha Mine)

Lord Harkon-Once a powerful king, Lord Harkon forsook his humanity, and offered up his own family, and multiple souls, to Molag Bal, in order to become a Vampire Lord. (Dawnguard)

Alduin-Firstborn son of Akatosh, World-Eater destined to bring forth the next kalpa, turned draconian tyrant, and devourer of souls. Now he seeks to reignite his reign of mortals. (Main Quest) 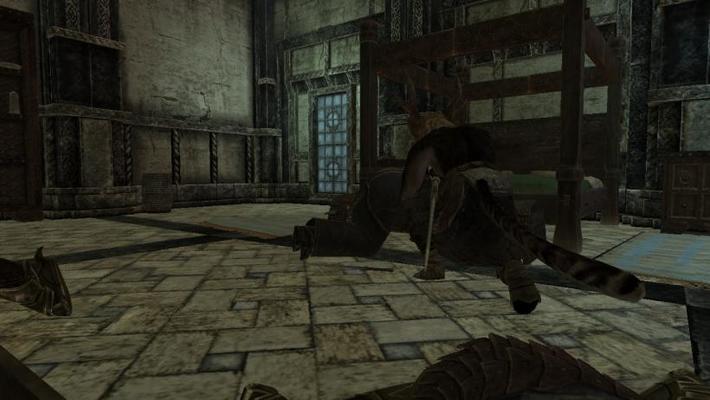 Mmm, how delectable you taste, my dear Elenwen 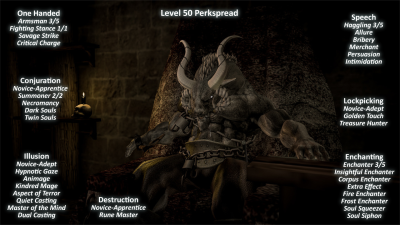 One-Handed-The main source of damage, and one way to boost your Wooden Sword damage.

Conjuration-With how relatively squishy you are, then raising the undead to help you, especially if you possess Ahzidal’s Ring of Necromancy, which causes your undead to explode in a frosty burst, can help deal with troublesome enemies, taking their aggro off you (Hopefully).

Illusion-As a proverbial bogeyman to the Khajiit, then spreading fear and messing with the minds of his foes is not only useful for RP purposes, but helping you get the small fry out of the way.

Destruction-Used primarily to deal ranged damage, but also for them sweet, sweet runes.

Speech-What sly daemon ain’t got a silver tongue? Also helps with training certain skills, and getting your paws on soul gems.

Lockpicking-As a phantasmal beast, mere locks prove no trouble to the Kra-’Athra.

Enchanting-Using the souls of the guilty to power his arms and armor is a fitting punishment, no? Plus, how else are you gonna boost the damage of the wooden sword?

Well, Merry Christmas, my fellow Forgers, especially to you Ramses! Thanks again to Lee for the screenshots and spreads my dude. Couldn’t have done it without you.