As with most of my builds, this one requires several mods to work at its peak. You will need the following mods, all of which are available on both the PC and Xbox One Special Editions of Skyrim.

To achieve the aesthetic shown here for this build, you’ll need these mods:

Of course, you can create your own aesthetic with vanilla stuff if you like, but this is what I used for my character. 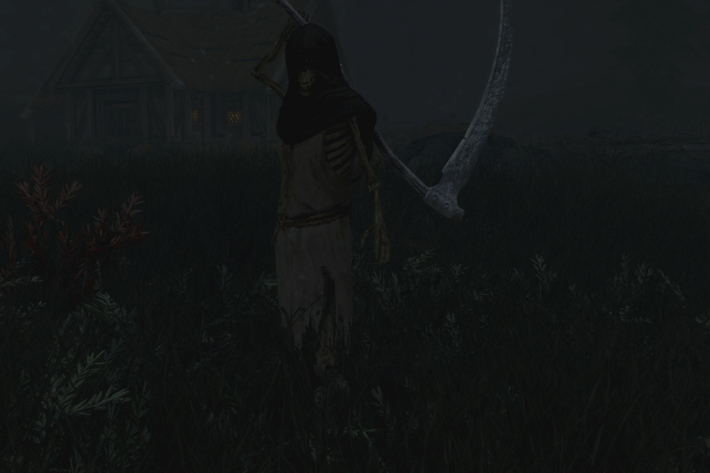 During Tamriel’s Witches’ Festival in the month of Frostfall, mortals face the realization of the greatest fears. Ancient and dark magicks are practiced around Tamriel this day, and nothing is quite so terrifying as the animation of a Scarecrow . . .

Tamriel’s annual Witches’ Festival is to most mortals an opportunity to make light of that which terrifies them, and to celebrate the coming autumn season. Yet, there is a darker side to this day of celebration. Something about that night makes it ripe for the darkest and foulest of necromantic rituals and evil conjurations.

The ancient arcane art of corruption has existed as long as necromancy has been known to mortals. Only the darkest of magicks and most evil of sorcerers are capable of animating an object that wasn’t meant to live or walk, and yet mortals seem to have a lust to prove that they can go a step beyond the line of possibility and morality. When the time is ripe for dark magick during Tamriel’s Witches’ Festival, the most skilled of conjurers and necromancers meet in secret all across the continent in an attempt to build a body out of inanimate materials and bind it to one of the restless spirits that has lost its way to Aetherius.

Although such endeavours rarely succeed, when they do the results are more terrifying than one could imagine. When a spirit is unwillingly bound to something that was never alive, or indeed meant to be alive, it drives the spirit insane and unable to fully control their hideously animated host. The false bodies that these arcanists use are typically created from old bits of wood, sacks, and straw, giving them a bent, decaying, and shambling appearance. Indeed, it is this particular practice that has earned such creatures their name: Scarecrows.

When the spirit’s consciousness breaks due to being bound to one of these “Scarecrow” bodies, it loses everything but the will to avenge it's own loss of self by using a powerful and terrible tool to make others feel the same: fear. Mindless Terror - Your shambling appearance and leering grin are enough to instill the deepest of fear into your enemies’ hearts, but you want to go deeper; to truly teach your foes the meaning of mindless horror, fabricate fear in the form of pure magicka so powerful that their muscles go slack and they literally drop their weapons in fright as soon as they raise them against you.

This ability is geared to be used directly at the start of combat. With the Descending Light perk your magicka regeneration will be extremely high at the very start of combat, but the effect will gradually degrade over a period of 15 seconds. Within this 15 seconds you can get a lot of Fear spells off on your opponents; and although this ability is not entirely dependent on Soulcrusher, it helps to have the extra 25 /sec magicka absorption from those enemies in the radius of Imposing Presence to get as many of those spells off as quickly as possible. The icing on the cake, terror will forces those within the radius of Imposing Presence to drop their weapon as well, making them nearly harmless in combat.

Feel My Pain - Every second is agony as you are trapped inside this shambling, barely animate body. Your only thought is to force others to feel your pain. How much fear and pain can the body of a man or mer withstand before it days, unable to host its spirit any longer? The time has come to find out.

This is a brutal ability that begins by casting Shared Trauma on one target that you would like to damage at the very beginning of combat. There are two versions of this ability: one for use when you are being attacked directly by an enemy, and another for when you want quick and easy damage.

To use the close-range version of this ability, quickly cast the spell a second time on the enemy attacking you, and then start hitting him with your scythe. As damage is dealt to the attacker from your scythe, equal damage will be dealt to the initial target of the spell. On top of that, any damage you receive will also affect your attacker, which in turn translates to the initial target once more.

To use the “fast damage” version of the ability, you must find an enemy affected Fear in some form or another. Activate them, and the Lamb to the Slaughter perk will cause them to stand, petrified, for 30 seconds. This allows you to easily hit them numerous times with your weapon, and because of Shared Trauma, the damage will be dealt to both the paralyzed enemy and the initial target of the Shared Trauma spell.

Hallucinogenic Horror - The body and mind of an enemy are possessed so much by terror that they start to conjure up illusions in their mind. Their horror is so great that their petrifying illusions and the damage they deal begins to manifest itself physically. Interesting. Fear is an even more powerful tool than you thought . . .

This is a pretty simple ability. Activating a hostile enemy will activate the Nemesis perk, which summons an illusion of that target that does 1% extra attack damage to the targeted enemy for every level you have in enchanting. At the same time, using the Evil Twin concentration spell, you can focus on the same enemy to summon another illusion of them that will also deal damage. This is an easy and effective way to deal damage in combat while not having to get close enough to use your scythe.

Combat for the Scarecrow should almost always start with the Mindless Terror ability. Since the Scarecrow isn’t exactly a tank, having as many enemies under a fear effect as possible will be key. That being said, some of the perks in that ability will take awhile to get, but a fair few of them are accessible at early game, so you should be able to use at least a watered-down version at earlier levels.  Casting Bone Spirit as well is a fairly cheap way to divert some attention away from yourself, allowing you to get off some of your other abilities.

That said, the Scarecrow does also have some fail-safe mechanisms in case things go awry and you find yourself taking unreasonable amounts of damage. First off, the Fast Healing spell is your basic “I Need Health Fast” go-to. You’ll also be getting some health consistently from close-range opponents from the Siphon Health enchantment. You can also use the close-range version of the Feel My Pain ability to get enemies out of your face. 50% health stat allocation should also give you a decent bit of cushion.

The last thing I’ll mention here is the reasoning for the movement speed enchantment, along with the 20% combat movement speed boost from the Shadow Stone. The main reason these were taken is because a lot of your abilities require you to be fairly close-ish to opponents, and if most of them are fleeing in terror, you’re going to need a way to catch up to them.

When it comes to roleplaying, obviously limit social contact, especially within cities, as it’s pretty un-immersive for an undead creature to be making small talk with the citizens of Skyrim. Inflicting pain and trying to sew as much horror as possible is the main goal. To that end, the Dark Brotherhood and Vampire side of the Dawnguard quest are options, but the roleplaying is a bit dodgy for a character like this.

Because of this, I’d recommending throwing most RP to the wind here and going around and enjoying the playstyle and halloween spirit. Do whatever questlines catch your fancy and enjoy this creepy character any way you want.

A mount and housing are unnecessary for this character, and followers are optional. If you want some housing, the Soul Cairn is an option, or any creepy housing, especilly if it let's you live in the undead plane (ex. Necrosis - A Player World Space). You could also use the witches' hut in Eastmarch if you wanted to go vanilla, but keep in mind you'd be killing that witch quite often.

You don’t really need a follower because you can conjure Bone Spirits to divert attention from yourself, and also create illusory images to help with damage dealing, but if you have a follower you want to use, go right ahead.

Thanks for checking out my submission to the “This Is Halloween” build event. Apologies for the slightly shoddy roleplaying element of this character, but hopefully the combat playstyle somewhat makes up for it. Thanks to Chris Diokno for the idea for this event: I had tons of fun making this character. No go forth! Cause pain and suffering across Skyrim! Haunt the dreams the its citizens and work your way into local legend as the most terrifying monster to wander its snowy peaks!

For anyone who didn't know, I have a YouTube channel where I post builds like this one. If you want to see more, check it out here: