I tried my best to recreate Jon Snow in Skyrim as a build. The mods I used are Ordinator, Andromeda and Imperious from Enairim. Soon, I will be uploading this to my youtube channel as well. Enjoy :)

(please keep in mind this is mostly a copy paste from the video's script so it's not a typical build, I still think it turned out fine though, otherwize I would rewirte it for the Forge. If you think I should make any changes, feel free to post a comment with feedback)

Jon Snow, while a bastard, is still a Stark and so his race will be a nord. This will give him a starting health of 110, magicka of 85 and stamina of 105, which will be perfect for his playstyle. He will also get extra Frost resistance, extra damage to deal to a chosen race (picked every 10 levels) and the ability to deal more damage the less health he has, while in combat. This will make it viable to fight at low HP to the last of his abilities. By clearing 8 dungeons he will also unlock a temporary power, which can be used once a day and it will allow him to regenerate his stamina really quickly in a short period of time.

For the standing stone, I have chosen the Warrior stone. While a simple solution, it will fit perfectly with his playstyle, giving him 10% faster leveling to all his warrior skills along with 15% extra power attack damage. His unlockable power, which is granted when after finding every standing stone in the game, will also allow him invoke the warrior to refill Health and Stamina and fortify them by the amount restored for 30 seconds. This means a lot of extra health and stamina when activated.

Keep in mind that fitting characters from one fictional world into another can be hard and not so lore friendly, so I tried to keep it brief and as lore friendly as I could.

In Skyrim, Jon Snow is the bastard son of an ancient Windhelm family’s leader, Ned Stark. His mother is but a wench from the Candlehearth hall, but Ned has enough of a heart to still keep Jon in his home. Years later, on a trip to the capital city of Solitude, most of the Stark family is murdered by the Imperials, and Jon, being a snow, a bastard, doesn’t inherit any land or money, and no one offers him any help, so he is left on his own to get revenge and make a living in the province of Skyrim.

He will join the Companions, to get contracts and to have a guild to help him train his combat abilities, and then he will join the Stormcloaks to get revenge for his family and defeat the Imperials, while making a name for himself.

Once the Vampire menace comes to Skyrim, he will also join the Dawnguard to help fight them off and keep Skyrim safe.

One of his goals will also be to do as many side quests, thane quests and similar types of quests to help the people of Skyrim and to, once again, make a name for himself while earning some coin on the side.

Jon Snow’s main skills will be:

I chose these because his combat style is going to be fast sword and shield attacks, and smithing will allow him to improve his blade, Longclaw, as he levels, making it useful no matter what stage of the playthrough you are in.

Here are the specific perks for each of the skills:

- Light Armor Mastery (2/2) - This is a must have, simply improves armor rating.

- Light Armor Fit - This perk improves armor rating by 25% when in full light armor, another no brainer

- Keen Senses - Actually gives you 20% more amor rating for not wearing a helmet, but it still allows you to use “wearing all light armor” perks like Light Armor Fit.

- Windrunner - Boosts speed in combat by 10%

- Fight or Flight - When hit in combat a small amount of stamina is regenerated for 6 seconds, and this pairs nicely with

- Falling sword - Forward power attacks make enemies bleed and when the enemy is under 25%, critical strikes do 10x the damage.

- Into the dust and Judgement - These two perks will buff you power attacks and stamina, but more importantly you will allow you to unlock

- Wandering Warrior - Whenever you defeat more than 4 enemies in a battle get a permanent 1% attack damage increase with one handed weapons, with a cap of 20%

- Deflect Arrows - Getting hit by an arrow while blocking does 50% less damage, and if it hits the shield 0% damage

- Dominion - Block 25% damage from all directions while blocking

- Power bash - Holding down attack while blocking does a power bash

- Skull rattler - Bashing does 3% more damage per point of stamina

- Cast Aside - Interrupting an attack with a power bash knocks the attacker to the ground, every 30 seconds

- Unstoppable Force - Able to sprint with a shield raised, which knocks enemies in your path to the ground. Costs 10 stamina per second.

- Meric (1/2) and Expert (1/2) Smithing - will allow you to craft glass, chitin, scaled, nordic and plate items at a forge. You don’t need both levels of the perks because you only need to craft light armor.

That’s all of the perks you will need, and it will take up a total of 35 perk points to unlock all of them.

For Jon Snow’s equipement I have chosen 3 great mods that will fit perfectly with him. All of these are listed in the description, available for both PC LE and SE, and XB1 SE. If you’re playing on playstation you will sadly need to make due with vanilla items.

The first mod is The Longclaw Sword, which will serve as Jon’s main weapon. It’s a beautiful one handed sword that can be crafted and is a must have for this build.

For the armor I have chosen the night’s watch leather armor from the Game of Thrones Armor compilation mod, along with the Dark wolf skin cloak from the Winter is Coming - Cloaks mod.

As for the shield, I chose the Starks Shield from the Starks shield mod. Another beautiful item for this character, although sadly it’s only available for LE Skyrim, instead you can also just use a steel or better shield from the vanilla game, which will still look nice and still fit with Jon Snow’s character.

For the companion, you can use one of the companions from the many game of thrones inspired follower mods, the best of which you can also find in the description. 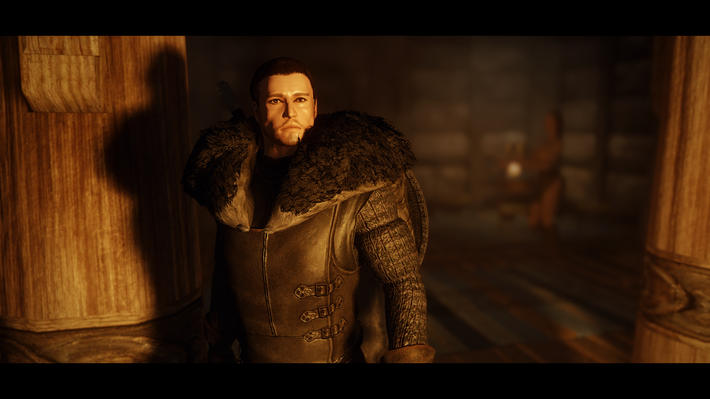