Greetings, sera. Blackblood here, with an interesting new thing. It took ages but I've finally done it. I've released it just like I said I would. In this page you'll find a group heavily influenced by the Templars of Assassin's Creed, due to me preferring the Templars to the Assassins after having played Rogue. This is my first (and only) Faction Profile, and I'd appreciate any criticism you have to offer. And so, without further delay, let me introduce you to... 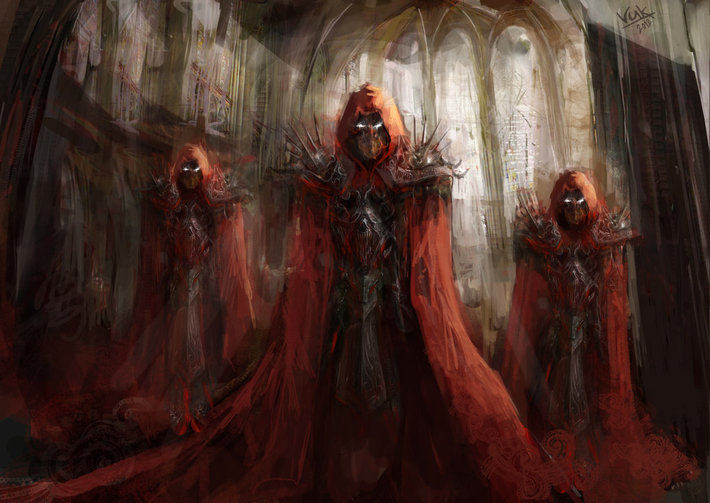 Welcome, sera. You seem to have stumbled upon my domain. Hmmm... Normally I'd turn an intruder like you to ash within seconds, but I can tell that it was not mere coincidence that we meet. Yes, I can sense a certain aura of destiny about you. You know what, I think I'll allow you to live. I can feel great potential within you, after all. I think I could use you. ...Use you for what, you say? Well now where are my manners? Please follow me, and I shall explain too you my - "our" - destiny. Within these walls, I shall show you the truth you have been waiting for.

For the longest time immemorial, man and mer had built upon themselves a faith in the Aedra that began existence, following their own pantheons and worshipping each as gods with shrines and prayers. However what these mortals fail to realize is that these gods . They look upon this world, watch it crumble upon itself, but do nothing for it. Those fools who believe that the gods speak to them or give them messages are only veiling themselves and those around them from the truth: The gods have long since abandoned the affairs of us mortals.

I was once a forsaken soul, but this is nothing new for a Dunmer. I'd spent my entire life as a slave, mastering the masters and nearly forging my own fate. Then, I was given the first chance I'd never had; I'd become a member of a group that sought to control the world and keep it safe from itself. They sought to control all peoples and usher in an era of ultimate dictatorship. No war. No violence. Just the men and mer of Tamriel living their lives. For a time, I suppose they would be the closest thing I could find to the truth. But as I lived my life and my purpose I slowly began to find the "real" truth; while the gods had indeed abandoned us they did not leave us without masters.

As I continued to fall into power and insanity I'd realized deep within what little sanity I had that the dark forces of this world are too powerful. We cannot achieve peace. We cannot do away with war. So long as these dark influences exist the hubris and vilification of mortalkind would never dissipate. I'd realized this as I perished from this world, and yet it seems I've been reborn. I cannot understand if the life I'd lived was but a dream or a vision from my master Hermaeus Mora, but what I understand is the realization. It was then that I decided to cast away my past oaths and creeds and forge my own. I no longer seek the path peace; rather I will be the one who forges the paths themselves.

This is what we are. We are control. We are what the masses need. Mortals need a guide to save them from the eventual armageddon that will consume them. We work under the name of the only higher power left in this world, the Daedric Princes. We both worship and acknowledge their existence and immense power, and it is after them that we base our efforts to blend the shape of Tamriel to our desires. Darkness looms over the world. Fear not the darkness that blankets your faith; for it is an awakening to the truth. To the realization you must make. Accept us, for we are the sentinels in the shadows, puppeteers with countless marionettes under our control. History's greatest achievements will inundate with the proof of our influence.

We are the Daedric Templars.

Countless events have transpired through time, and even space. Ancient enemies have been sealed away and resurrected too many times to count. Monarchs have fallen and Kings have lead their countries to ruin. Brothers raise sword against each other for petty reasons rife with the evidence of shortsightedness. Humanity is under threat of extinction by the elven supremacist group known as the Thalmor. I could begin to name more but to do so would extend far too long. All you need to gain from this is that major events are rampant.

How much influence do you think it would take to shake these very events to their core? One person dying when they should not have. A shipment of arms and armor disappearing out of nowhere. The wrong person winning an election of office. So many ways to shake Tamriel's history, does it not boggle your mind? If I were to tell you how simple these acts were, how easy it would be to either doom mortalkind or save it, you would call me a fool. But it is true; our goal is to bend not just the mortals, but their creations and their legacies.

We seek to bend the events of Tamriel to your choosing; to create the paths instead of follow them. Assassinating a king or noble. making off with critically important artifacts. And everything in between. None is beyond our grasp. We operate and exert our influences based on the Daedric Princes' respective aspects. As such we have a multitude of specialities for various operatives whom wish to worship a specific one.

There are, of course, ranks to our organization. Where you stand determines how much you know or will know, and determines how much influence and power you have. In order to advance in rank, you must either take missions or contribute to the organization as a whole (this includes IRL stuffz like images and sites and stuff). Once an Agent has proved his worth once, he will be inducted as an Envoy. Envoys that further prove their value may become Masters, and only the truly greatest of Masters can become something more. Be warned, it is possible to be demoted from one rank to another. The ranks are as follows:

These are the different specialities of Envoys and beyond. Each one is based on an individual Daedric Prince, and each is integral to our mission in Tamriel. The easiest way to find a member of the Daedric Templars is to look out for anyone wielding any gear of our order. The most noticable is the armor, which consists of a copy of the Vokun mask, a set of Black Robes, Ebony Gauntlets and Ebony Boots. The aquisition of this gear serves as a useful test for new initiates wishing to become recognized, as you must prove your loyalty to the faction while wearing this equipment. Or order's more subtly recognized symbol is often a unique Silver Ruby Ring. Despite how similar it might look to other apparel of similar appearance, it is enchanted with unique Daedric energy, making it resonate with others who wear the same type of ring.

This is a list of our principles and commandments. These must be followed and adhered too, for they are the doctrines that protect our organization and are not to be taken lightly. Failure to uphold them, either purposefully or otherwise, runs the risk of demotion, or possibly termination.

--[2]   Never share our secrets nor divulge the true nature of our work. To do so is to risk termination of you and the enlightened.

--[3] Never commit to any acts or agendas that could active compromise the organization. To do so will bring about heavy consequences.

--[4]   Do so from now until death, whatever the cost, for our deaths are often not an end, but another beginning. Remember that our purpose is not for ourselves, but for them.

--[5]   Each member may have greater fealty to their chosen Lord. We must respect this faith as they respect yours.

--[6]   Respect the authority of those of a higher rank than you, but remember your own intelligence. If something is wrong, report to a (Grand)Master.

The Thieves Guild
Having connections in the deepest of pockets serves us well. Therefore our Envoys of Obscurity have taken deep root into this group. At least one of the Nightingales within the Trinity is an Envoy, with another possible low-ranked one acting as a normal member. With their influence in Skyrim, most notably their connections to Maven Black-Briar, information and wealth are plentiful.

The Dark Brotherhood
A splinter group of assassins, I've sent at least one Envoy of Obscurity their way. Using the Dark Brotherhood as the blade that ends many a threat in Tamriel covers our tracks quite nicely after all; the attention will be shifted to them, and no one will even know to think of the Daedric Templars as being involved.

The Khajiit Caravans
A hefty sum of gold, an even heftier sum of Moon Sugar, and Ri'saad was more than willing to partner up. After having been involved in and improving various dealings with him, he came to accept that a business partnership with me would last long after the war was over.

This is a list of all currently known members of the Daedric Templars, ordered first from rank descending and then from date of joining. An image of their profile at the time will be added, as well as a short description and detail about their duties. Should you wish to join, post in the comments your application, including the below information (with an image for your chosen char, if possible), and you shall be inducted into the organization.

Agents must complete at least one mission before they can be recognized as Envoys. Afterwards, they can either request missions or accept missions found on the Task Board from time to time. If you want a mission, you need only ask and I shall try to find the time to allow you to ply your trade upon Skyrim. Missions can vary from simple quests in the land of Skyrim to more complex acts of influence or power.

Name: Sheo-Blackblood
Templar Rank: +++[Grandmaster]+++
Envoy of: Magic
Worshipped Prince(s): Hermaeus Mora
Reason(s) for Joining: I was chosen to lead this group into helping bring about the Daedric Era. 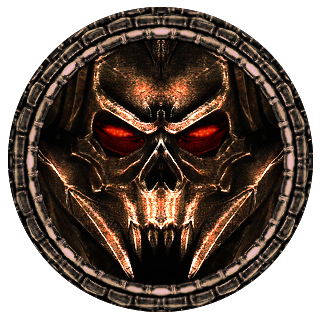 "May the strings of fate weave to your will."
~Maxim of the Daedric Templars