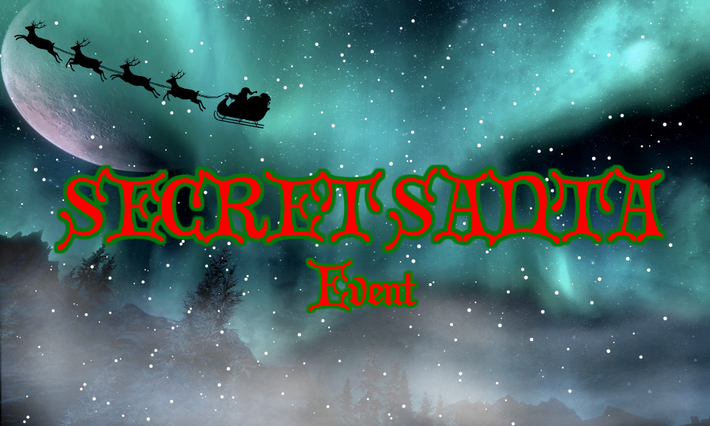 Hail, Adventurers! Welcome to the holliest, jolliest build event yet to hit the Skyforge! Help to spread some Christmas Cheer by joining this event and bringing the wonderful holiday season to Tamriel. The idea this time around is to create a Secret Santa experience for the Elder Scrolls community. All participants will submit a build idea and have them be randomly distributed among all other participants. On Christmas Day, everyone will post what they have come up with and message the person who submmitted the idea they build off of to give everyone a bit of an Elder-Scrolls related Christmas present this year.

Obviously, it is a little bit early to be thinking about Christmas at the time this post is released, but we want to get as many participants as possible to make this event the most fun it can be for everyone who joins. Essentially what will happen is when you participate, you will submit a build idea that later this month will be given to a random participant. This participant will only be given the name of the build idea and the person who submitted it. From there, we're off to the races. On Christmas Day, everyone will post their builds and fire a message to the person who submitted the original build idea. Everyone will get to make a build and receive a build, so we should have some good fun on Christmas Day.

This event is very open, so idea submissions can be Christmas themes, or not. It's up to the individual submitter what they want to do with it.

* In order to be counted as part of the "Secret Santa" event, you'll need to submit your build idea in the range of November 4th - November 25th. After that, the official building period takes place from November 25th - December 25th. All builds must be submitted either on Christmas Eve or Christmas Day, whichever is more convenient, along with a message and link to the person who submitted the original idea

* Along with the name of your build concept, you are allowed to submit a maximum of two clarifying ideas for what you have in mind. Ideas should be short and sweet. Do not elaborate too much so as to let the person who receives your idea have the most freedom possible

* DO NOT TELL A PERSON IF YOU HAVE THEIR BUILD!!! Christmas is no fun if you peek at the presents ;D

* Builds can be full length, or mini-builds as we did with the "This is Halloween" event; whichever you prefer is fine. We want as many participants as possible, so if you feel that a full-length build is too much, go with the mini option

Submit an idea by simply commenting below saying you want to participate and giving the name of the build you have in mind, along with the two clarifications, as stated in the rules. Distribution of the ideas will be completely random. You will receive a message on November 24th with the idea submission you received so you can start building.

Idea: The Ghost of Christmas Yet to Come (Assassin) (Illusionist)

Monk of the Hist -

First Previous of 5 Next
This reply was deleted.