This is the final piece of my multi-group post, but this piece is where I feel most comfortable. This character was inspired by a couple aspects that I love: no crafting and lore. Connected to this build are discussions pertaining to the lore of Shadow Magic, artwork representing Shadow Magic, and this character's backstory. This has been a great journey in delving deeper into what makes a character portrait come alive in my eyes and I hope you enjoy this post. Once an archer, always an archer

Ceya-Tar is an early Cryo-Nede synonym for Ceyatatar (Shadow of the Father Wood) and is simplified in meaning "Shadow of the Wood". This character build is a amalgamation of a character's struggle, eventual journey, and coming to power discovering the mysteries of Shadow Magic, a lost art form in the realm of magic hidden inside the universe of the Elder Scrolls.

The Ceya-Tar is not the character's name, but a myth. In taking this name, my character's journey brings him into the depths of darkness only to realize there is light in the darkest corners of the world capable of destroying with great power but also saving the ones that he holds dear. A Bosmer from Valenwood, this Ceya-Tar travels through harsh deserts and treacherous terrain to come to a location that was once witness to one of the most powerful mages that ever lived: Azra Nightwielder.

Azra Nightwielder realized that in shadows lied the possibility of infinite worlds spanning across infinite dimensions and planes of existence. In reading this, I wanted to create a character that had no infinite power of super-crafted gear. I wanted to create a representation of this magic using a simple mage that has the ability of control. 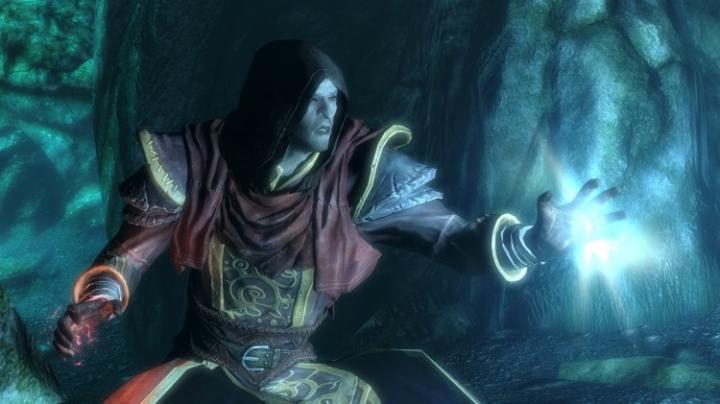 The Ceya-Tar is a no-crafting build. This means no heavy fire-power weapons from smithing, no insane effect potions from alchemy, and no overpowered enchants from enchanting. The Ceya-Tar relies on specific combinations of spells, powers, and skill to achieve success in journeying throughout Skyrim and questing to unlock more mysteries.

I chose to make this character a Dragonborn for a few reasons. The first is very simple: he is and he is not at the same time. Given shadow magic states that there are multiple versions of one's self existing in different realms and worlds, the Ceya-Tar could be one of them. Second, a shadowmage's ultimate goal is to meld those existences together, creating the most powerful version of his or herself in one realm. Lastly, absorbing dragon souls is a skill that a shadowmage could understand, breaking the known rules and laws of the world and bending them to his will.

I will state, however, that given some negative connotations that "shadow" has in most areas, the Ceya-Tar is in no way an evil build. The search for power beyond one's own existence could be used for evil, as Pergan Asuul had attempted. Yet this power is not of an evil nature. Azra Nightwielder attempted to unlock the secrets of this magic to further understand it and this is where the Ceya-Tar lies and believes in. Illusion: The great art of control. Shadow Magic lore states that to manipulate the shadows of a given conflict (torch on ground, light on wall, or nations at war) one can potentially bend the will and original state of the opposing forces, essentially controlling them. Fear, frenzy, and calm effects allow the Ceya-Tar to both protect himself as well as pit his enemies against each other. The ability to stay unheard (Muffle) as well as unseen (Invisibility), both powers of a plane-shifting shadowmage.

Alteration: Manipulating shadows is a great power when one can also create sources of light. Shadow magic is present within what are called "Shadow Gates" which are magical barriers. The Ceya-Tar can use this power through flesh spells for defensive purposes. Alteration's Magelight is also an incredible useful skill. In creating light, onlookers will be distracted enough for the Ceya-Tar to slip past or to manipulate the enemy's position for an effective elimination. Archery: With his Bosmeri blood and Valenwood origin, the Ceya-Tar is a gifted archer capable of inflicting maximum damage from a distance onto his enemies. With the use of the Bound Bow, the Ceya-Tar can fire spectral, Daedric arrows at lightning fast speeds for impressive damage, creating a DPS rate equal to even the most powerful smithed weapons.

Sneak: A shadowmage's ability to remain unseen is unparalleled. The Ceya-Tar is skilled in the art of sneaking, passing enemies by without them noticing and remaining hidden to give full advantage of sneak attacks. Utilizing sneak is not a 100% profession of a shadowmage as their spellbook of manipulation is an extremely effective defense, but a Bosmer hunter sticks to his roots. 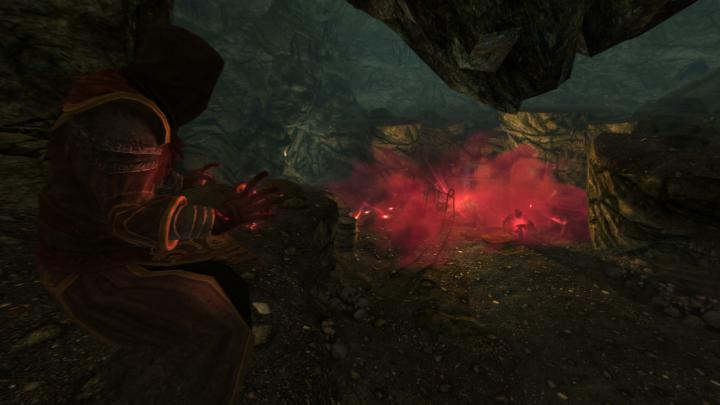 Conjuration: The realm of shadow and realms of other worlds are easily reached into using the power of the Ceya-Tar. Summoning a shadow bow from realms that are not normally seen, the Ceya-Tar can fully extend his archery prowess using a weightless and powerful Bound Bow, decimating enemies either from a hidden position or firing off towards a charging horde of foes only to disappear and reappear at a different location to start the onslaught again.

Restoration: Bringing out his natural affinity for healing himself and innate magical ability, restoration is the last of the Ceya-Tar's skills. Restoring one's own life force is important for treacherous journeys and channeling Aetherius to heal is a gift the Ceya-Tar knows well. He can also Avoid Death when near low health as his incarnations from other realms support his soul and life. The Ceya-Tar is a agent of magical powers capable of shifting reality to suit his goals. Within Skyrim's limits, we can recreate this power of control through various means: Bending the will and minds of your foes

Instead of creating an entire discussion devoted to roleplaying as a shadowmage, I thought it would be more productive to instill a few choices into those who choose to play as one. How will you use your power? For what purposes in life did you seek it out? How did you acquire it? These questions were the start for my own role play: a Bosmer fearful of an impending Wild Hunt that would destroy his loved ones and his home passed the point of rebuilding due to the impending war. Knowing of the stories of the battle at later named Azra's Crossing, he travels to the site to discover he is still alive and attains the knowledge of shadow magic, yet is captured and winds up in the thick of Skyrim's conflicts. He stays to make sure his presence and the resurgence of shadow magic does not create another Shadow of Conflict, or great beast from the shadow realm manifested from warring nations or peoples.

Shadow Magic has been a pleasure to explore and try to recreate in Skyrim. No crafting can sometimes be viewed as very weak in the eyes of some, but in this case the right combination of skills makes the Ceya-Tar a character to remember. Hope you enjoy.

BIG, BIG thanks to Zimbu for the absolutely fantastic screenshots for this build. I had a very hard time choosing from the multitude of shots he sent me but they all look fantastic.