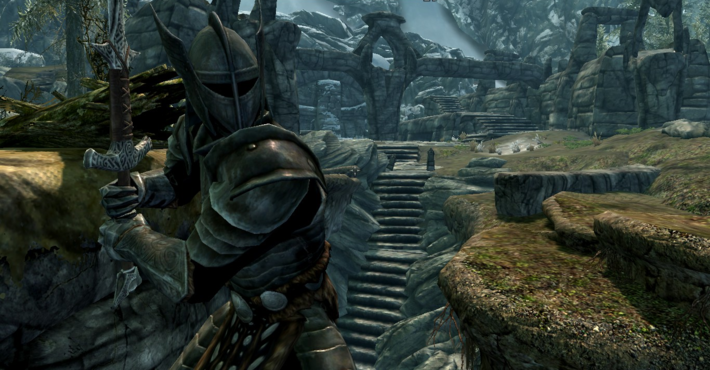 The Insurgent is a young Nord who set out alongside his childhood friends for the Imperial City in hopes of making a name for himself and earning money for his village. While attempting to cross the border, they were caught alongside the Stormcloaks in an Imperial ambush. Refusing to listen to their pleas, his friends attempted to resist capture and were shot down by Imperial Archers. In despair, The Insurgent surrendered and was carted to Helgen alongside a ragged Nord and surviving Stormcloak soldiers. Having faced the true nature of the Imperials, The Insurgent now seeks to join the rebellion to eradicate the corruption within the empire. 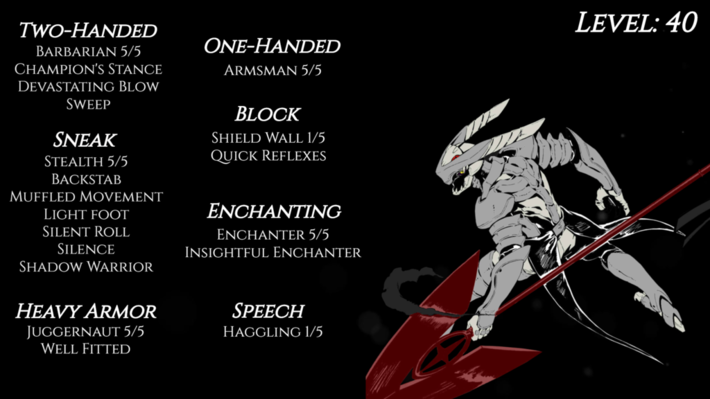 Two-Handed: The Insurgent’s primary damage source. Important perks include Barbarian to maximizes our natural damage potential and Sweep allowing us to quickly cleave through large groups of enemies.

Sneak: What is an assassin without the shadows? Stealth and Muffled Movement are taken in order to prevent detection while Backstab is taken to ensure successful assassinations.

Heavy Armor: Upon releasing his one-handed sword, The Insurgent wears his magical silver armor, shielding him from harm. Juggernaut and Well Fitted are taken to maximize protection as smiths are unable to improve his magical armor.

One-Handed: The Insurgent’s weapon of choice in assassination operations. All points in Armsman is taken to maximized damage and ensure a quick assassination. Other perks are unnecessary.

Block: Despite being one of the least perked skills, it is one of the most valuable in ensuring The Insurgent’s survival in open combat. A single point in Shield Wall will provide sufficient damage mitigation while bashes are used primarily to cancel enemy attacks. Quick Reflexes is an important perk allowing you to dodge enemy power attacks with ease.

Enchanting: The Insurgent Wields a one-handed sword which can be released into a magical armor accompanied by a greatsword. Points in Enchanter and Insightful Enchanter helps maximized any damage bonuses granted by his equipment.

Speech: Another lightly perked skilled, yet very crucial in aiding The Insurgent’s fight. Speech helps fund training and any equipment necessary for the revolution. 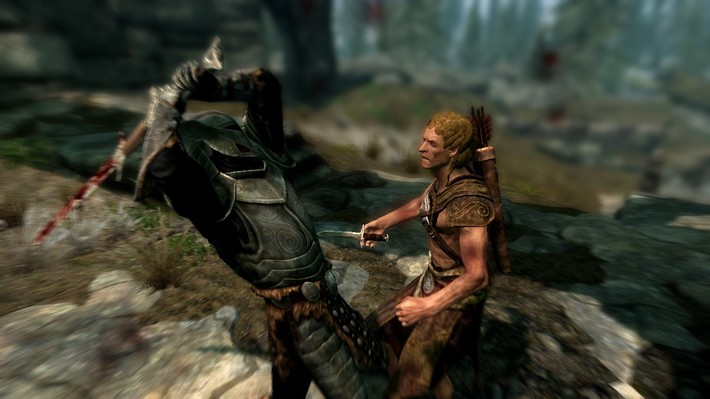 The Insurgent starts out slow as a warrior with the option of using a one-handed or two-handed weapon. I’d highly recommend picking up the thief stone early to quickly level sneak any time possible while you alternate between one and two-handed combat to level both skills. Heavy armor will level naturally but a trainer is recommended to ensure it does not lag behind your offensive skills. Block will level up excruciatingly slow but only needs to reach level 30 for the quick reflexes perk. To level enchanting, I’d recommend hoarding any daggers you find while exploring and enchanting it with turn undead which can be found fairly cheaply at low levels. Profit from these enchanted daggers can be used to purchase more soul gems or fund training.

During the early stages of the game where you are unable to assassinate targets or face other warriors, I found myself utilizing a horse very often. While struggling to fend off the bandits from Halted Stream Camp and the camp resting below a cliff near Whiterun, I accidentally climbed on a horse and proceeded to slowly cut away at the bandits’ health while running circles around them. I easily took down 6 bandits at once on master difficulty with a mere steel greatsword and iron armor.

Once your skills have developed enough, the real fun begins as you are able to transition between an assassin and a heavily armored warrior. Most fights open up as an assassin seeking to remove the backline. Archers and mages are your worse enemy because they will tear through your health if left unchecked while occupied by warriors. Survey your targets by keeping track of what enemies are present and where they are located through the use of Aura Whisper. Mages are the main priority since spells are nearly impossible to dodge compared to arrows, but ideally, both mages and archers are taken out of the equation before the fight even begins. If you are found, it is because you chose to be found as victory is guaranteed upon decimating the backline. Warriors can easily be dealt with by dancing around them with Quick Reflexes + Slow Time (Extended Slow Time).

Enemies such as dragons and dwarven machines have always been difficult for me but are manageable with some patience. For dragons, find cover to shield yourself from their breath attack while waiting for them to land, which can be followed up with a few swift strikes to their back with the use of Elemental Fury. Dwarven mechanisms often utilize power attacks which can be capitalized upon with the use of Extended Slow Time, or you can simply brute force your way through with Elemental Fury.

All of your gear can be obtained fairly easily before level 20. You can pick up Farkas’ Skyforge Steel Greatsword in Dustman’s Carin after he transforms into a werewolf, allowing you to request a Skyforge Steel Sword from Eorlund. Steel Plate armor will naturally begin to spawn in upon reaching level 18, otherwise, you can quickly grab a set minus the helmet due to unfortunate circumstances surrounding Uthgerd’s death.

After escaping the block at Helgen, The Insurgent follows Ralof to Riverwood where they seek shelter with his sister, Gerdur, for the time being. Lend your aid to Riverwood in seeking out the Jarl of Whiterun to send troops to defend the settlement in case of a dragon attack. On the road to Whiterun, you encounter a group of warriors fighting a giant. Join the Companions and hone your skills in battle up until joining the circle. These group of warriors will provide excellent training and equipment necessary for the rebellion ahead.

A trusty steed will prove invaluable in fights where you are outnumbered. Complete Promises to Keep to receive Frost who will accompany you the rest of your journey. The Empire’s battlemages are feared and renowned all across the land. Complete the Book of Love to gain Mara’s favor, granting you magical protection.

After gathering all of your equipment, head to Windhelm and seek out Ulfric Stormcloak to aid in the Stormcloak Rebellion. Ulfric will instruct you to seek out Aventus Arentino as rumors of the child summoning the Dark Brotherhood has surfaced. The skills they possess will be crucial to the war effort as eliminating important imperial figures and generals will minimize war casualties and ensures a swift end to the rebellion.

Following the death of general Tullius, Skyrim is now been freed of the Empire’s corruption, but your job is not finished. Rumors of a Missing in Action Stormcloak soldier has revealed that the Thalmor has been holding him hostage in Northwatch Keep. As you report back to Ulfric, you notice Blood on the Ice on the path by the graveyard. Solve this murder mystery plaguing Windhelm and bring the killer to light.

Skyrim now faces an even greater threat than the corruption of the Empire. Prevent the end of the world by destroying Alduin, the world eater. Save the people from becoming livestock by killing Harkon and free Solstheim from Miraak’s rule as he plots to return to power.

This is my first build and entry for the Secret Santa event. I was given the criteria of “Heavy Armored Assassin (Greatsword)” as requested by Chris Diokno. Since I know Chris is an anime fan, I took inspiration from Tatsumi from Akame ga Kill! The build is still pretty rough around the edges but I will revisit this and update it up to standard in the future.