So damn, I'm sorry, I keep changing my darn mind. New job and all has curtailed development on the Turning Wheel so I turned back to Vanilla with a build that is literally almost five years old! The old Ning site once had an Exotics Contest, and I was in between submitting a Dwemer build and this one. Ultimately, the Dwemer build became the Exterminator and this languished because I struggled to find an rp angle that really motivated me to complete the build. Enter this contest and I found one. Think on this…

What if a fallen Lady of Light and Life, was so jealously enraged at the Daedric Prince who caused her fall that she, in their ongoing war, found a way to corrupt his most prized manifestation of ultimate domination, his Daughter, so to speak? Using a minion of her own creation, eternally sworn to her service, to rape from the very King of Rape, and then bend the darkness of His creation into the folds of her Mistress’ light prisms. Bringing life from deep undeath through the power of her Cause to wield Dawn’s greatest weapon. Mold a Champion of brightest light from the Darkest shadows of Coldharbour. And then, once newborn to the Holy Light of the Lady, this Champion and the Mistress’ loyal servant would then cleanse, purge Tamriel in a font of Aethereal light so blinding and beautiful, that nothing undead would remain. What creature could the Mistress conceive that would be up for such a daunting task? What creature would consent to being ripped from the Colored Rooms and cast down to the dull nirnly plane with absolutely nothing? What creature would welcome such torment? What creature could fight through so many demons to obtain something so utterly foul and bring it to her Lady’s Light. A Dark Seducer? No, they are far too dark for this task. Nay, for a task this great, there is only one acceptable to Merid-Nunda. A golden creature of healing starlight, lightning, and undeniable loyalty. 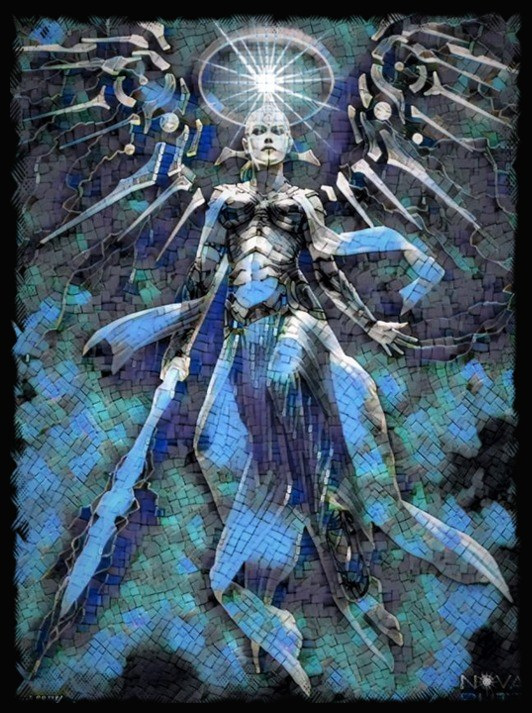 This build is based on the Aurorans from Oblivion's Knight of the Nine dlc, which are Daedra created by Sheogorath, Azura, and Meridia. In KoTN, they help defend Meridia's Champion, Umaril the Unfeathered, against the Champion of Cyrodiil. Her enemy in the Daedric world is Molag Bal and with good reason. There are hints, and I totally buy it too, that she and old Baly were once lovers, leaving her, a child of Magnus, and one of the Magna-ge, to be shunned by her brothers and sisters, other Aedra and lumped in with the Daedric princes. I will expand on this lore as I progress with the build. So, expect artifacts of both Molag Bal, Magnus, and Meridia to play a special part in this build. I'm sticking mostly with ES IV in recreating this type of Daedra for Skyrim, with some minor changes to reflect ESO and the lore. This is a build that'll have several options to realize into fruition based on whether you are playing on console or on PC, with or without mods. 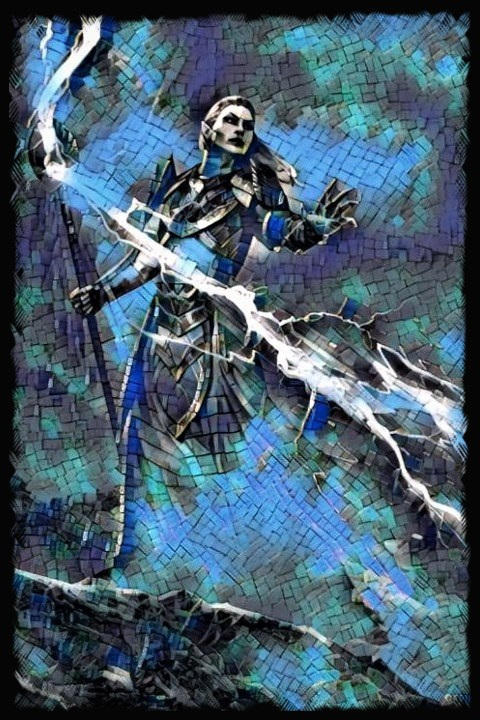 Race: Altmer. They are tall and superior in every way for this build. The bonuses to three skills are fabulous.

Alignment: Whatever fanatical devotion to Meridia and using that power to restore her light to the world and bring the darkness of Coldharbour into her fold at whatever the cost is. :D

Class: Elements of a Summoner, a Crusader, a Battle mage, and an Elementalist.

Blessings: None, dammit. She’s a Daedroth, the blessings of the Aedra mean nothing to her. If you must for gameplay, Julianos is actually an interesting choice as he was a god that experienced some rejection when he was in the form of Jhunal. A shunning, so to speak, from the rest of the pantheon. Similar to Meridia in some ways. Or, if you’re going modded, Wintersun, lets you worship Meridia to your heart's content and offers some great perks for selecting our Lady of Light. I'll add those to the build, so people know, though I myself do not have Wintersun on PS4.

Stone: I originally went with the Atronach stone in the first playtests to simulate the Auroran’s in game 25% resistance to magic, but you can also find a number close to that in gear found in the game, so in my last playtest, I took a risk and went with Apprentice and did not look back. She regenerates magicka like a wee battery with highborn and the perks from Restoration. And yeah, she’s weak to magic, sorry, not sorry. Learn to play with weaknesses, people.  She's been cast down from her plane, she shouldn't be strong. This task is a test of her faith.

Shouts: Having a thought with this one. I always have dragons in the air, because I always enjoy killing them, and she didn’t struggle to kill them on the difficulty I tend to test at (Expert) but the main quest isn’t really a goal. Now, I did read some oog stuff (I’m a lore nut, I know) that mentions Meridia having the ability to bend time, by riding a rainbow across the dragon, bending and condensing it while she traveled. Dragon is a metaphor for time, so, I’m thinking that slow time could actually be a viable option for her.  It would offer a very interesting synergy with both restoration cloak spells and chain lightning. (I want to play test this to confirm, so I’ll probably rig something up this weekend). At the same time, I’m not sure I want to deal with Hermeus mora too much.

Skills: I went completely Vanilla, unmodded for this. So, Destruction, Restoration, Conjuration, One-handed. The Auroran's in ESO carry one-handed weapons and shields (so block is optional if you think you are too squishy in the beginning) and I'm simulating the effect of the Knights of the Nine Aurorans with Shock magic and bound weapons.

Gear: Necromancer's amulet (part of my ongoing 'keep this amulet away from Necromancer's' series of builds), Zahkriisos (for both the shock boost, shock resistance, and the look, Auroran's have 50% resistance to shock), Elven Armor, Auroran armor (if you feel like looking up steam), any gloriously golden armor. Ebony spell knight armor is also a wonderful option for the CC people out there (cleanse the heart or leave it corrupted, she doesn’t really give a shit since she doesn’t believe in Mara, both armor options offer fantastic boosts for her character). The inventory was specifically designed to be lean and mean. There are no houses to store all your pretty things, none of that.

Gameplay: Fast-paced and rather dangerous, because the armor rating will not be high as stuff will be mismatched and the Auroran can’t be arsed to smith anything, grow shit, or enchant shit. She is a Daedra on a mission. Cloak yourself in Meridia's loving protection, conjure bound weapon and blast and whack whoever dares attack you. Use wards to block spells, because if you get hit, you will probably feel it. I’m so happy, always wanted to play a ward based build and I finally got to. No sneaking, no funny business. Sneaking is for wussies. :D There was a very fun amount of ways to play and I liked shifting between the various combat methods, but all of it is fast.

No potions, so respite becomes important, minimal looting or use of other skills barring the perked ones. Aurorans are also associated with Sheogorath and Azura, but I also read that sometimes Azura is aligned with Bal, which puts a certain spin on things, don't it? I corrupted that bitch's star. Again, souls are not the issue, it's the undead. Isolationist gameplay. No house, no food. She is almost like a machine, like a Terminator in service to her Lady Prince. In addition, when she finds Meridia's beacon, I had her leave offerings... of all the undead she's killed until she was worthy to enter the temple at Mount Kilkreath with Serana.

Quests: The Break of Dawn (one of the last quests, after Serana is cured),  Dawnguard, The Man who Cried Wolf & The Wolf Queen Awakens, partial main quest, College of Winterhold, Nordic tombs, Necromancer lairs, and Vampire lairs, Laid to Rest, Blood on the Ice, Fail The House of Horrors, FAIL the Taste of Death, Frostflow abyss, Saints and Seducers CC, Crypt of the Heart,  No Book of Love, you don't love Mara. But the magic resistance! NO! You love Meridia! And Kynareth can kiss your Auroran arse too! You fuck up that Eldergleam proper, kill dem spriggans, and make that tree BEEEEG in Whiterun. But you help Andurs at Whiterun cause skeletons are bad.

Training: None. This, for me was a build that would refuse training. I also refused potions of any kind, because most things made by mortals are just eww.

Follower:  Serana, the new acolyte of Meridia. Her new Champion. Go through Dawnguard and cure her! Then, and only then do you do the Break of Dawn. Equip her in Elven or Glass armor and just let her new light shine, baby.

To do: The playtests for this build were done a long time ago, about three or four to be exact, over the course of about 5 years and I have all my notes for them. The last playtest saw Apprentice stone use and heavy consideration of the ebony spell knight armor or continuation of Elven gear, it’s really dependent on what enchantment you get from Elven gear when it drops. You could also just piece meal it too, a combo of Elven, Zahkriisos and the ebony spell knight gear. The best part of the Ebony gear are the gauntlets, which are amazing either way.  I also have to make the following.

Feedback is appreciated as this is, a draft of a build. The more we hash stuff out now, while it's still in WiP, the better it'll be when it's actually posted, I always say, so bring it.