Greetings, sera. Blackblood here, and if you've played Skyrim as much as I have you've likely dabbled in Necromancy at least once or twice in your playthroughs. It's not easy to create a pure necromancer though, but thanks to the perks found in Ordinator I believe I've created one that's at least interesting to play. This build aims to create what I believe to be a tried and true pure necromancer, a mage who dabbles in the dark magic, armed with poison and disease for personal offense. It is my hope that this build will give the player the true feeling of being the master of death and souls, without relying too much on frost spells and the like. And so without further ado, I present... 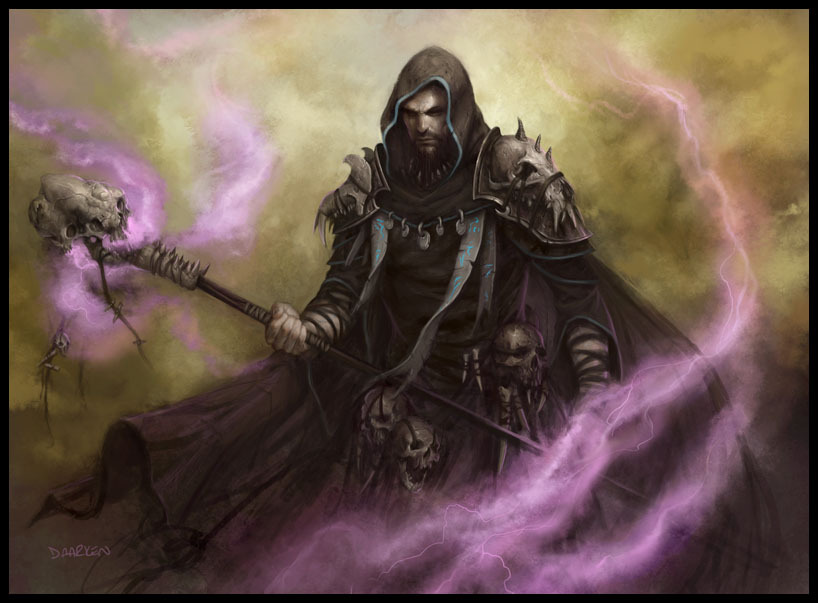 "The time has come. Our bretheren, the necromancers, vampires, liches and other undead lords, shall rise once again to ply our trade and raise the bodies of the dead in Tamriel. With the Mages Guild all but destroyed, and the world remains reeling from the Great War. Skyrim in particular is ripe with the fresh bodies of fallen soldiers as the Civil War rages. It is there that the Order of the Black Worm will rebuild itself, and once again hold dominion over death.

Worry not my acolytes, for Mannimarco still lives as the God of Worms. As the Necromancer's Moon he watches over us, as we profane Arkay's gift and raise legions of undead in his name. He grants us the power to capture the souls of even the most pious of the gods' servants. By his blessing, the world will one day remember the blight that is the Black Worm."

The Order of the Black Worm arose from Mannimarco, the ex-Psijic God of Worms, when he formed his own cult to rival the Mages Guild founded by Vanus Galerion. Thanks to his wisdom and guile, as well as bribery and other influences, they evaded Vanus' attempts to dissolve it, and have been able to thrive up until the Oblivion Crisis. Some of the group's accomplishments include the widespread tolerance of necromancy in certain provinces, as well as the spread of soul trapping.

The group recruits mages, outcast witches and Reachmen wizards into its ranks, with promices of great power for those who served loyally. Groups of cultists form a series of cells called "Worm Nests",  with each being led by a Worm Anchorite who supervised Necromancer Adepts, Worm Warriors, and Worm Thralls, and all are sworn to secrecy on pain of undeath. In the past, Anchorites were able to communicate with Mannimarco directly, though how they did so is not clear. Some cultists may decide to become undead themselves, being known as Worm Eremites, and these liches are always guarded by undead minions.

The Order was the eternal foe of the Mages Guild, but with their dissolution following the Oblivion Crisis, the cult is ready to rise once again. Skyrim is the perfect place for a new beginning; the College of Winterhold is tolerant of necromancy, and the rest of Skyrim is too caught up with the Civil War and dragon attacks to focus their attention on our revival. 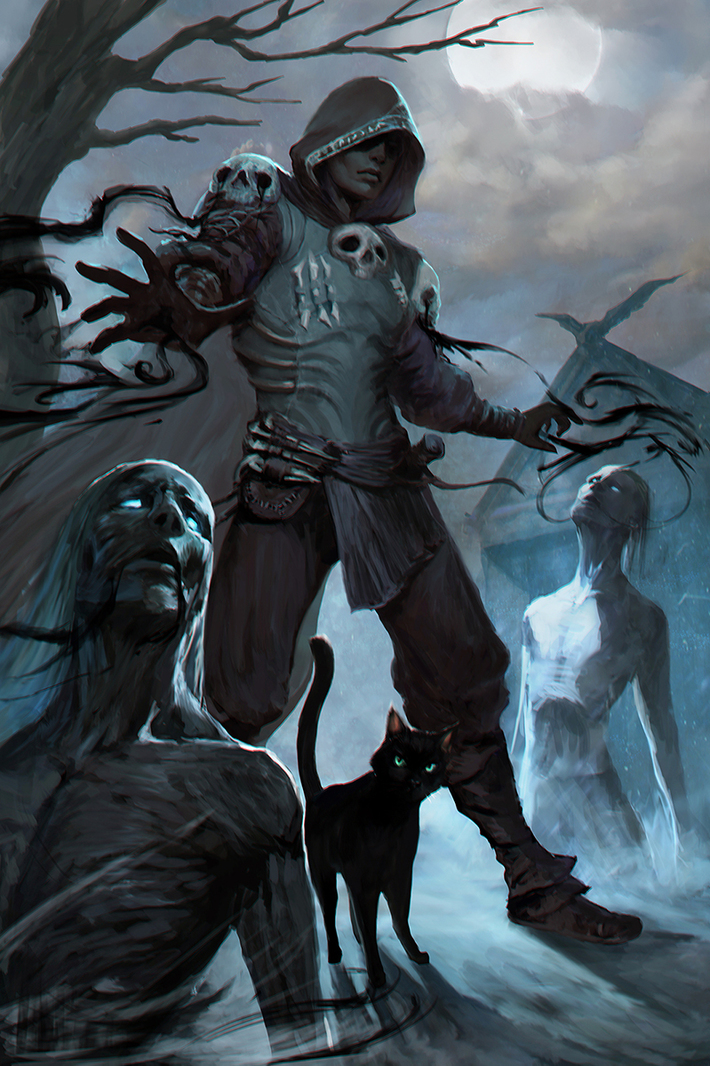 :Race:
Bretons are the first natural choice, due to their boost in Conjuration. Imperials have a boost in Restoration, which also makest them a worthy choice. Finally, Dunmer fit aesthetically, giving you a chance to practice that "fithly dark elf necromancy".

:Standing Stone:
Start out with The Mage, then once you think your skills are at an acceptable level, exchange it for The Ritual Stone.

:Powers and Shouts:
Soul Tear, and by extension Summon Durnehviir, are the only shouts you'll need. Other than that and The Ritual Stone, you don't really "need" anything else.

:Attribute Spread:
4 Magicka, 1 Health, and 0 Stamina, until you get to 150 Health, then put the rest into Magicka.

- Conjuration -
"A standard skill for any acolyte aiming to raise the dead. The most potent of necromancers are capable of summoning stronger undead, or wielding more potent Skeletons."

Necessary to... well to be a necromancer! Includes all the standard buffs to undead minions, as well as perks that boost the number of them you can have at a time. The most important perk in this skill tree is Bone Collector. This perk will let you create skeleton thralls to command in combat.

- Restoration -
"Many use this school of magic to restore, however we have discovered new secrets that allow us to profane that magic, turning it to harm our enemies and heal our thralls."

Only two reasons we need Restoration: Heal Undead, and the Necromanticon perk. This perk will give you disease spells, one when you take it, and two more when you hit levels 50 and 75, which are useful to a necromancer since they use a DoT effect, allowing you to cast it on enemies and then sit back as your minions do the rest.

- Illusion -
"Finer mastery of Illusion magic is required to reign control over the dead. With it, our forces will fight with greater fervor and force, protecting us as if we were gods."

Master of the Mind lets undead become affected by Commanding Presence, boosting their offensive stats while they surround you. On a somewhat lesser note, the other mind-affecting spells can be quite useful against enemies; the Fury spells can produce bodies for you to raise without having to get your hands dirty, the Courage spell can buff the health of your minions a little, and the Calm and Fear spells can make dealing with multiple enemies less troublesome.

- Enchanting -
"A Worm Cultist must be capable of enchanting their own equipment to improve their magical abilities. They must also be adept at wielding a staff to empower their spells."

Staff Channeler lets you gain Enchanting experience while you wield a staff in combat, and Secretkeeper increases the magnitude of your spells by 25% while you've got a staff in your right hand. And then there's enchanted equipment. On top of spell school enchantments we can also boost our health to make up for the lack of focus in that attribute.

- Alchemy -
"Poisons are one of the most efficient methods of killing enemies to raise thralls. These are invaluable to any initiate who has yet to raise his own army."

Especially at the start of the game, poisons can help out a great deal with killing enemies. If you can get your hands on some ingredients with the (lingering) damage health or paralysis effects, you'll have a good panic button for tougher enemies, assuming they aren't undead, dragons or automatons. You can either use a dagger for application, or a bow for long range poisoning.

"Stay faithful to the Order of the Black Worm, and in time your loyalty will be rewarded. Soon, He will return to set the world right in due time, and those who would stand in his way will suffer eternally at his hands, just as those who stood opposed before. Until that day, you must believe and be patient. Hide in your caves, in your ruined forts, in your secret lairs. Raise your minions, summon your servants, cast your spells. Answer the call of the Order when you are needed. Watch and listen."

You won't be a powerful cultist starting out, and until you start building skeletons and crafting poisons you're going to be a little frail. Before things start to pick up you'll need to rely on a follower or two to get through most situations. Pick up the Healing Hands and Courage spells to not only keep them alive and empowered, but also level your Restoration and Illusion respectively. You should then focus on getting the Bone Collector perk for raising skeletons, enchanting your gear with useful enchantments, and crafting virulent poisons. I recommend paralysis and damage health effects, both of which are found on Human Flesh. You'll also want to find a staff to level Enchanting passively in combat. Start out with an offensive staff, then switch to a Staff of Soul Trapping once you no longer need it, as non-DoT damaging staves just end up hitting your undead minions when you've got too many of them.

After you've leveled up quite a bit you should be strong enough to continue on without your follower, so feel free to kill him off for materials. When you've got enough skeletons, focus on getting Restoration to 40 for the Necromanticon perk, and training Illusion to 60 for the Master of the Mind perk, which will make your undead minions affected by the Commanding Presence perk. If you're feeling up to becoming a vampire, you can also join the Volkihar Clan to gain access to Heal Undead for your minions. After you've gotten those perks, feel free to shift all your focus to the Conjuration tree to obtain any perks you feel necessary. You can focus on improving your skill in either reanimating undead in battle, or commanding your skeleton army.

Roleplay-wise, you are a member of the newly resurrected Order of the Black Worm. Though their "master" was killed off at the end of the 3rd Era the group still lives, and is rebuilding itself within Skyrim's blood-soaked province. There is no end to the number of necromancers you will have to compete with, hidden within warlock lairs all across the lands, but these tips will help insure you stand on top:

If you're still in need of some inspirations, I have a list of recommended quests and dungeons for your dread servant to tackle:

Ruler of the Dead
Master of the Mind + Commanding Presence + Crown of the False King+ Undead Crown
"Expert necromancers are capable of wielding their undead minions with greater efficiency. All those under their influence are known to be more powerful than the average reanimated minion, hitting harder and being harder to kill."

Commanding Presence and Undead Crown are constant effects that make your minions just that much more difficult to kill. Crown of the False King allows Commanding Presence to give your minions 80 points of armor and 20% magic resistance, while Undead Crown restores 10 points of their health and magicka per second while they're within 15 feet. These perks combined insure your undead stick around for far longer than without.

Malignant Command
Skeleton Mages (2) + Plague Doctor + Amplify Lethality
"Worm Cultists with a greater affinity with poison and virulence can empower their Skeleton Mages with poison magic. The most unlucky of foes will find themselves the target of the cultist's power, making them more vulnerable to their toxicity."

Taking the 2nd perk of Skeleton Mages lets you make variants with poison magic, which can be made more deadly thanks to Restoration and Alchemy. The Plague Doctor perk weakens the poison resistance of nearby enemies by 50%. You can also use Amplify Lethality to make an enemy even more vulnerable. This perk gives you a Greater Power that reduces the poison resistance of a target by 250% for 10 seconds. Combined with Plague Doctor, your enemy will be four times more vulnerable to poison for a short while, long enough for your mages to purge them.

Have some Recommended Mods:

Black Mage Armor - An excellent armor/robe mod for any dark or evil character, including necromancers.

Undead Servants - Because why do the mining yourself? Why not have your undead slaves do it instead?

Clean up your Corpses - Pick up and relocate bodies. the Fleshsaw also makes getting Human Flesh easier.

Undeath and Immersive Lichdom - Becoming a Lich? What self-respecting Worm Cultist would refuse?

Thanks for reading up to this point. I had a blast putting this build together, and I do enjoy a good necromancer playthrough as well, even though this was like, my 3rd playthrough. Hope you enjoyed this build to the end, and I'll see you at the next one! 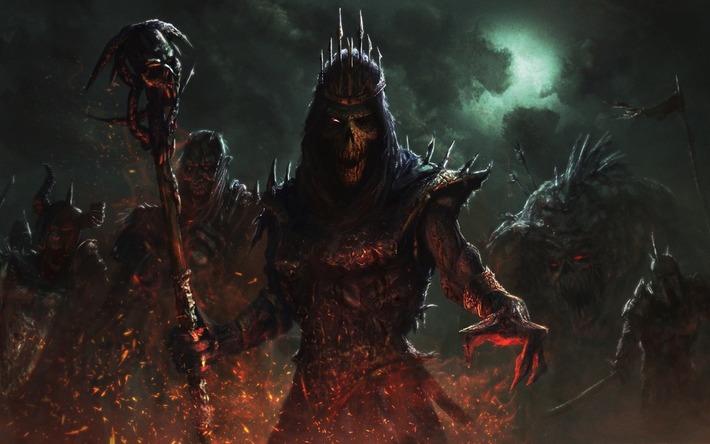 "Behold the power of the Worm Eremite! Vast are the legions of undead I will soon wield. Will you take up this power alongside me?"